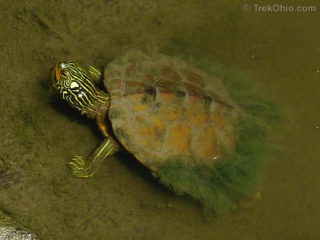 When I caught sight of this turtle trailing a skirt of algae, I was immediately reminded of the similar turtles that are often depicted in Asian art. In China such a turtle is supposed be one of four sacred animals: the turtle, the tiger (or kirin or rhino), the dragon, and the phoenix. The Japanese adopted the mythos surrounding the sacred turtle whom they refer to as the minogame. Not every turtle gets to become a minogame, just the lucky ones who have been blessed with long END_OF_DOCUMENT_TOKEN_TO_BE_REPLACED