Although Ohio has a number of tick species, the species which carries Lyme disease has been relatively absent from our state… until now. The Lyme-carrying tick is the Black Legged Tick, also known as the Deer Tick (Ixodes scapularis). There are now established populations of Black Legged Ticks in 26 Ohio counties including Franklin and Delaware counties in Central Ohio. Most of the affected counties are east of Interstate 71 (see the link to the Toledo Blade at the end of this post for a map of their distribution in Ohio).  Since this species of tick has a two-year reproductive cycle, health officials fear that we will be hit hard in 2014.

Unlike most ticks that live in Ohio, the Black Legged Tick prefers to live in the woods instead of tall grass. And unlike most ticks, they are active in the winter whenever the temperatures are above freezing.

It is believed this tick species lived in two areas following the end of the last ice age, what are now known as Connecticut and Wisconsin. Since then the population has been spreading toward the heartland of America from both sides.

How Ticks Get On You

According to Dr. Glen Needham, ticks rarely are found above knee level in the wild. When you discover one higher than that on you, they’ve most likely crawled up there. Ticks do not drop from trees onto your head. Ticks are completely blind, so they wouldn’t even know you were below them. Instead when a tick is trying to find a host it moves to the end of a twig or leaf and holds its front two legs up so so it can grasp onto you when you brush up against it.


Keeping Ticks Off Your Skin

You may have heard that one coping strategy is to wear light-colored clothes. It is not the case that light-colored clothes repel the tick. The advantage of wearing light-colored pants is that it makes it more likely that you’ll notice the tick while it’s still on the outside of your clothing, so you can brush it off. You may also have heard that it’s good to tuck your pants into your socks. Again the idea is to prevent the tick from latching onto your flesh underneath your pant legs. There is still the possibility that it will crawl upwards until it does find exposed skin to latch onto. But if you are wearing light-colored pants, it will give you or your companions time to notice it before this can happen.

Two chemicals can be used to help protect you from ticks: DEET and Permethrin. Use DEET on exposed skin. The Center for Disease Control (CDC) recommends using repellants that contain at least 20% DEET. An application of DEET should last up to several hours, after which it should be reapplied.

Permethrin is a chemical that’s applied to clothing, shoes, and tents. According to Dr. Glenn Needham in the video, Beware Ticks in Winter, the Permethrin should be sprayed on till the surface of the fabric is damp. He claims such a Permethrin treatment will last through six hot water washings. The CDC notes that it is possible to buy clothing that has been pre-treated with Permethrin that will last through 70 machine washings.

Clothing treated with Permethrin needs to be washed separately from other clothing. It can have bad health effects on pets (especially cats), so make sure that you read the instructions carefully.

Even if you are feeling tired after a day outdoors, you should inspect yourself for ticks as soon as you possible, and the CDC recommends showering or bathing within two hours of getting indoors as this provides another opportunity to detect the little blood suckers. Parents should inspect their kids. The CDC recommends examining:

children for ticks under the arms, in and around the ears, inside the belly button, behind the knees, between the legs, around the waist, and especially in their hair.

I once discovered a tick on my own scalp by running my finger tips over my entire scalp.

One of the difficulties in finding the Black Legged Tick is that they are much tinier than the ticks we are accustomed to seeing here. The nymph form is miniscule. I discovered a very tiny tick on my leg while hiking around Lake Vesuvius in Wayne State Forest. It was so tiny that my husband wasn’t convinced it was a tick. However it wouldn’t brush off, and I could place a fingernail under its abdomen and lift that part away from my skin while the head stayed put. I carry needle-nosed tweezers with me while hiking, so I removed it immediately. It is recommended that the site, the tweezers, and your hands (if you’ve touched it) are disinfected immediately. I carry Purell with me while I’m hiking. Since that contains alcohol, I used that. 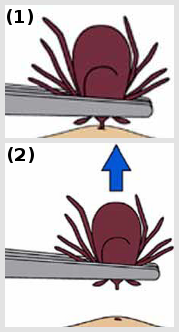 By removing the tick within 48 hours of the tick latching onto you, you can prevent the disease from being transmitted via its saliva. The best way to remove a tick is by using tweezers whose tongs come to a narrow point. The narrow points at the end allow you to grasp the tick by its head without risking squeezing its body. You don’t want to squeeze the body because you risk squeezing out fluids from the tick into your bloodstream which might introduce pathogens. Once you grasped the ticks head lift straight up with steady, even pressure. If you twist while pulling up, you risk having the ticks head or mouth parts breaking off and being left behind.

Folk Remedies That Do Not Work

The following methods of tick removal do not work:

Source: see Tick Myths and the video Ticks in Winter linked to at the end of this post.

One of the earliest signs of Lyme Disease is the Bulls Eye Rash. If this appears you should seek medical treatment immediately. The course of the illness goes much better if it is detected and treated early.

We saw the following sign at a trailhead in Shawnee State Park.

Well for one I have to say I found it a little bit intimidating that a person would have so many nymphs and larvae on him that it would be inconvenient and time-consuming to remove them one at a time.

But since state officials are posting this, I assume that it works. We are now including some duct tape in our hiking gear.