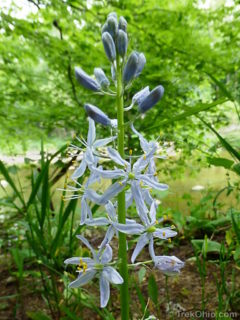 The Augusta-Anne Olsen State Nature Preserve occupies 132 acres of Huron County. At one point it was named the Vermilion River Preserve, but it was renamed after the woman whose initial donation of land to the state made the preserve possible. Among other things the preserve is known for its large variety of spring wildflowers. We visited May 20th of this year with the hope of seeing some of the spring wildflowers. The entrance to the preserve is well-marked, and there is a kiosk near END_OF_DOCUMENT_TOKEN_TO_BE_REPLACED