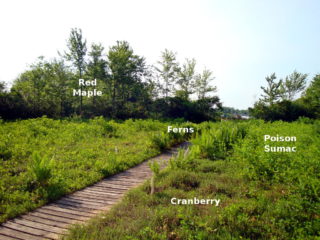 Previously I've pointed out that Jackson Bog and Cedar Bog aren't really bogs. Now it's time to look at a nature preserve that really is the bog that it claims to be: Cranberry Bog State Nature Preserve. However it's not like any other bog in the world since the entire bog is floating in the middle of a lake. Here's what happened. For thousands of years Cranberry Bog was an ordinary bog located in what came to be known as Big Swamp. In 1830 Ohio decided to build a dyke in Big Swamp END_OF_DOCUMENT_TOKEN_TO_BE_REPLACED