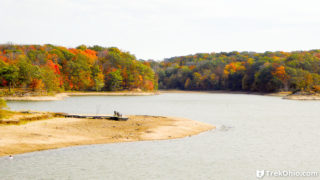 A.W. Marion State Park is a 309-acre park in Pickaway County that I described after a previous hike in the spring (see here for description and photos). On October 29th we returned to the park to hike the Hargus Lake Perimeter Trail. We thought that peak fall color had probably passed, but when we arrived we were pleasantly surprised at how colorful the park was. As it turns out there are many maple trees in the park, and many of these were a brilliant red. We made a GPS trace of our hike. END_OF_DOCUMENT_TOKEN_TO_BE_REPLACED 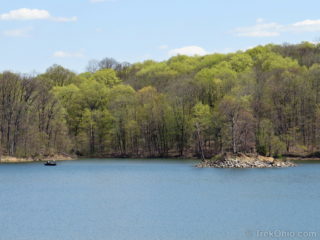 A.W. Marion State Park is a 309-acre park with a 145-acre lake within its borders. The lake, known as Hargus Lake, has been stocked with largemouth bass, muskellunge, bluegill and channel catfish. Currently the Ohio Dept. of Natural Resources (ODNR) only permits boats to use electric motors. Although the lake doesn't have a beach, boaters are allowed to swim from their boats in one corner of the lake (the swimming area is marked on the park's map). I visited the park twice in late April of last END_OF_DOCUMENT_TOKEN_TO_BE_REPLACED