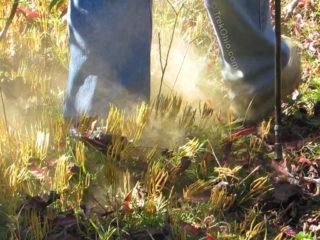 During a recent hike to Trimmer Arch, I was startled when my peripheral vision caught sight of "smoke" rising up around my ankles. When I stopped and looked down, I realized that it wasn't smoke, but instead clouds of spores. These ripe spores were being released by ground cedar. The spores produced by it and other members of its family have an exceptionally high fat content. People have utilized these spores industrially over the years, and in this capacity they are referred to collectively END_OF_DOCUMENT_TOKEN_TO_BE_REPLACED 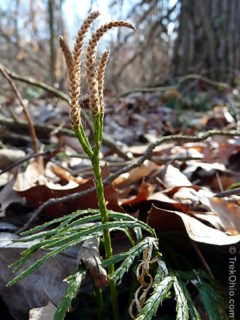 The above plant has a number of names. I'm going to go with Ground Cedar, but it belongs to a family of plants (a genus) that's also called Groundcedar, Crowsfoot, and Clubmoss. I'm not absolutely certain, but I think its specific species is Diphasiastrum digitatum. It is a vascular plant which means that it has veins within its stem and leaves for transporting fluids, minerals and food. Before I became acquainted with it, I had thought that ferns were the only vascular plants that reproduced END_OF_DOCUMENT_TOKEN_TO_BE_REPLACED