The above plant has a number of names. I’m going to go with Ground Cedar, but it belongs to a family of plants (a genus) that’s also called Groundcedar, Crowsfoot, and Clubmoss. I’m not absolutely certain, but I think its specific species is Diphasiastrum digitatum. It is a vascular plant which means that it has veins within its stem and leaves for transporting fluids, minerals and food. Before I became acquainted with it, I had thought that ferns were the only vascular plants that reproduced via spores. But it turns out that there are other plants called fern allies that also produce spores. Not only is Ground Cedar a spore-producing fern ally, it produces spores that can catch fire in a spectacular way. It’s fire-catching spores are used to this day to make special effects fireballs in movies. In the past its spores were used in old-time flash photography and to my complete surprise the combustible spores of one of its relatives were used to power the first internal combustion engine.


It is a little plant that grows on forest floors. The plant’s stem runs horizontally along the ground, either above or just below the ground’s surface. So what look like a group of little plants could actually be the leaves of one plant growing out of the same stem. It was named “Ground Cedar” because it looked a bit like boughs of the evergreen cedar tree lying on the ground. It’s evergreen quality made it a popular Christmas decoration in an earlier era. This drastically decreased populations of the plant in the wild. However it has since rebounded.

I mentioned earlier that Ground Cedar is a fern ally. Fern allies were the very first vascular plants to grow on land; they belong to a subdivision of plants known as Lycopodiophyta which began about 410 million years ago. An extinct genus of the fern ally, the Wattieza, is regarded as the first tree. A species more closely related to the Ground Cedar pictured here is the scale tree (Lepidodendron), a mega clubmoss. It is believed to have topped 100 feet in height (30 m). But more importantly to us, over time some of its remains turned into coal… which brings me to first internal combustion engine. 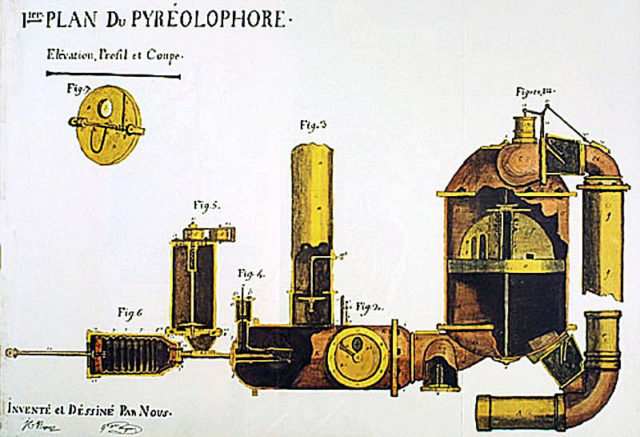 Design plans for the Pyréolophore.

The first internal combustion engine is believed to be the Pyréolophore (pronounced pea-ray-oh-loh-for). In 1807 the Niépce brothers of France used a prototype of the engine to power a boat up the Saône River; later that same year Napoleon Bonaparte granted the Niépce brothers a patent for their engine. Unlike today’s internal combustion engines which are typically powered by liquid fossil fuels, the Pyréolophore was powered by “controlled dust explosions”. For the most part the dust used was coal dust (remains of ancient, mega clubmoss) and Lycopodium powder (the spores of living clubmoss or Ground Cedar).

The spores of this little plant catch fire in the most amazing way. If you make a little pile of the spores and bring them into direct contact with a flame, nothing happens. Well, they might scorch and turn a little black, but they don’t generate any flames themselves. However if you mix the spores with air creating an aerosol and then light it, a fireball is produced. An aerosol can be made in a relatively low-tech fashion simply by putting the spores in a squeeze bottle, then squeezing it.

The video below is a science demonstration in which Steve Spangler shows both how resistant the spores are to catching flame when they are in a clump, but how spectacularly they light up when turned into an aerosol.

The reason these spores are so flammable is their high fat content and large surface area. But when they do catch fire they burn so quickly that they usually will completely consume themselves before lighting anything else on fire. The fact that they usually burn without burning anything else has made them a favorite for special effects. Lycopodium powder has been used in magic shows, theaters, movies, fireworks, etc. It has also been used as a flash powder by early photographers.

In the top photo of this post, the highest structure sticking up is the strobilus which houses the spores. Below are some additional photos of strobili (plural of strobilus) at different stages in the life cycle.

The only place I ever see Ground Cedar growing is in parks and nature preserves, and following the rules of such places I would never remove any part of these plants from the forest. But if you have some growing on your own property, there’s an interesting video that shows how to collect the spores from a European relative of this plant at YouTube: Lycopodium Powder – How to get / make it!

Now that you know how flammable the spores can be, you might be surprised at the many other uses to which the spores have been put. For instance because of its high fat content its oiliness allows it to be used as a lubricant, and it has served this purpose in both surgical rubber gloves and condoms. It has also been used as a coating on pills to keep them from sticking together. Other surprising uses include its use as an ice cream stabilizer and in fingerprint powders.

There is also a long folk history associated with the spores and the plant itself. At one point the spores were inserted into the nose of someone who had fainted as a “reviving powder.” The spores were boiled to make a liquid concoction that was said to kill lice and revive wine

The leaves were dried and made into a tea-like infusion that was believed to cure women’s ailments like cramps.  (Note: I am not endorsing the plant’s use for any of these!).

The plant does best in well-drained, somewhat acidic soil. In the wild it is found in areas where the soil has been disturbed and in conifer forests. It is capable of creating a thick ground cover. However it is nearly impossible to cultivate. When grown from spores, it can take up to 20 years to reach its full maturity, and it requires the presence of specific fungi in the soil to thrive.

3 thoughts on “Ground Cedar and Its Combustible Spores”