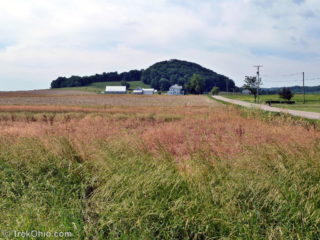 Twenty one thousand years ago two-thirds of Ohio was covered with a thick layer of ice from the Wisconsin glacier. In what would later be Fairfield County, two adjacent knobs made of Blackhand sandstone successfully resisted this glacial onslaught. Instead of engulfing these knobs, the ice sheet flowed around them on its southward journey that stopped just short of the Hocking Hills. Today they're known as Allen and Ruble knobs, and they're the main attraction of the 88 acre Shallenberger State Nature END_OF_DOCUMENT_TOKEN_TO_BE_REPLACED 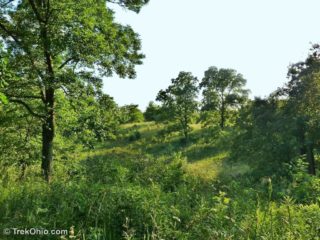 An esker is a special sort of hill. Eskers develop underneath a glacier, so in Ohio they formed during the last ice age. The sediment that eventually creates an esker starts its life as the sand, gravel and rock deposited on the bottom of a riverbed. However the unusual thing about the associated river is that it flows under great pressure beneath a massive glacier. Instead of having normal riverbanks made of earth, this kind of river flows through a crevasse or icy tunnel at the base of a glacier. END_OF_DOCUMENT_TOKEN_TO_BE_REPLACED 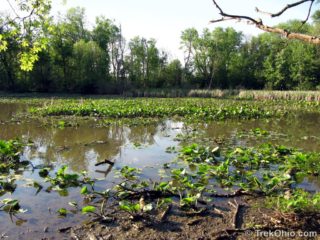 Boyer Nature Preserve is wonderful, mini-wetland that sits in the middle of suburban Westerville, Ohio. The site's main feature is its stream-fed pond. Although it may look like an ordinary pond, it's actually very special due to the way that it was formed. During the last ice age, Westerville was beneath approximately one thousand feet of ice (305 m). As the climate warmed, a large fracture formed near the edge of the melting glacier. Once that fracture became large enough, a huge slab of ice separated END_OF_DOCUMENT_TOKEN_TO_BE_REPLACED 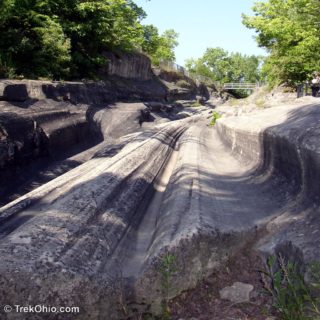 The glacial grooves on Kelley's Island are a designated National Natural Landmark. They were formed during the last Ice Age about 18,000 years ago, and they are the world's largest, known glacial striations. Typically glacial striations are formed when boulders and gravel are dragged across the bedrock under the immense weight of a glacier. Geologists rely on these natural features to determine the direction in which the now-melted ice once flowed. However according to the Ohio Department of Natural END_OF_DOCUMENT_TOKEN_TO_BE_REPLACED

Although reindeer don't live in Ohio now, it was a different story during the last ice age. Photo courtesy of Dean Biggins of the U.S. Fish and Wildlife Service, license: Public Domain Reindeer once lived in Ohio. About 24,000 years ago the Wisconsinan ice sheet expanded into Ohio. Central Ohio was buried under 1000 feet of ice (305 m). Near Lake Erie, the ice was five times thicker. As the ice sheet expanded southwards, all forests in its path were ground to a pulp. Animals from END_OF_DOCUMENT_TOKEN_TO_BE_REPLACED