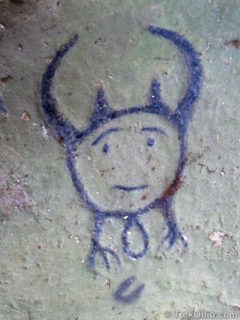 The Petroglyphs The Leo Petroglyph State Memorial is a site with about 37 petroglyphs (line drawings carved in stone). The petroglyphs were made on an outcropping of bedrock consisting of Black Hand sandstone. Based on the weathering of the exposed sandstone, it is believed that the carvings are about 700 years old. That age would make them the handiwork of the Fort Ancient Indians, a late prehistoric culture that was active in Ohio from about 1000 A.D. to 1650 A.D. I wasn't sure exactly what END_OF_DOCUMENT_TOKEN_TO_BE_REPLACED