The Leo Petroglyph State Memorial is a site with about 37 petroglyphs (line drawings carved in stone). The petroglyphs were made on an outcropping of bedrock consisting of Black Hand sandstone. Based on the weathering of the exposed sandstone, it is believed that the carvings are about 700 years old. That age would make them the handiwork of the Fort Ancient Indians, a late prehistoric culture that was active in Ohio from about 1000 A.D. to 1650 A.D.

I wasn’t sure exactly what to expect when we visited. I guess I thought the petroglyphs were situated on a cliff wall. But the outcropping of bedrock on which they appear resembles a sloping, stone floor. Although the petroglyphs are carved in the bedrock, the carvings have been traced with charcoal to make them easier to view. They are within an open-walled structure that resembles a picnic shelter.


The figure above is thought to be a shaman. Since little is known about the tribe who created these petroglyphs, some of the figures are hard to interpret. One interpretive sign at the site describes the figure above as a shaman wearing a headdress. When I look at it I’m reminded of an eared owl because the headdress appears to have bird’s feet at the bottom. So the objects that might be thought of as “horns” on the top of the headdress become flapping wings via my owl interpretation. And the loop between the legs becomes an egg or bird’s tail if you think of the figure as being bird-like. Since one of the common traits of shamanistic cultures is the belief that the shaman can transform himself into an animal or unite with an animal spirit, then this would be a shaman in communion with an owl’s spirit. And instead of being a realistic portrait of a person wearing a headdress, in my way of looking at it, it is a more symbolic figure. Regardless of its true representation, I really liked that the face looked relaxed, even friendly. 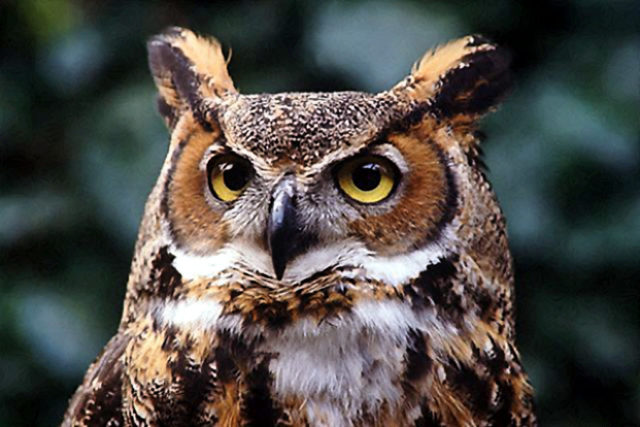 Here’s what the park’s entrance looks like. The structure that encloses the bedrock outcropping resembles a picnic shelter and even houses a few picnic tables.

Here’s an overview that shows most of the bedrock floor. Sorry if the tilt gives you vertigo.

Let’s take a look at some of the petroglyphs. Some are easily recognizable, while the symbolism of others remains a mystery.

Bob and I both enjoyed looking over the petroglyphs, and even though their meanings may be mysterious to us now, I’m glad that these prehistoric people were able to leave something that would continue to intrigue us to this day.

It turns out the Leo Petroglyph State Memorial also features a half-mile nature trail. Since the entire park is less than 13 acres, I didn’t have high expectations for this short trail, but I was pleasantly surprised. The trail starts near the rear of the shelter housing the petroglyphs. It descends into a gorge with intermittent cliff walls and other rocky outcroppings. The cliff walls are between twenty and sixty-five feet in height. After going up the gorge, you eventually hike up to the rim and follow the rim trail for a while. Then you cross a bridge and return on a trail that runs along the edge of the park property with farmland just beyond.

The collapsed bridge is actually a different bridge that’s located near the start of the trail. I suspect it was a casualty of the powerful windstorm that hit Ohio in the summer of 2012 (discussed here). It was easy to go to the left of the bridge and pick up the trail again.

Update: A visitor to our blog, Brian Vinson, has left a comment saying that the bridge has been repaired.

Here are a few wildflowers that we saw during our visit in September.

It turns out the site is also home to a rare, Ohio flower: the Round-leafed Catchfly. I didn’t see any blooming while we were hiking there, so I’m including the photo below by Alfred Crabtree. 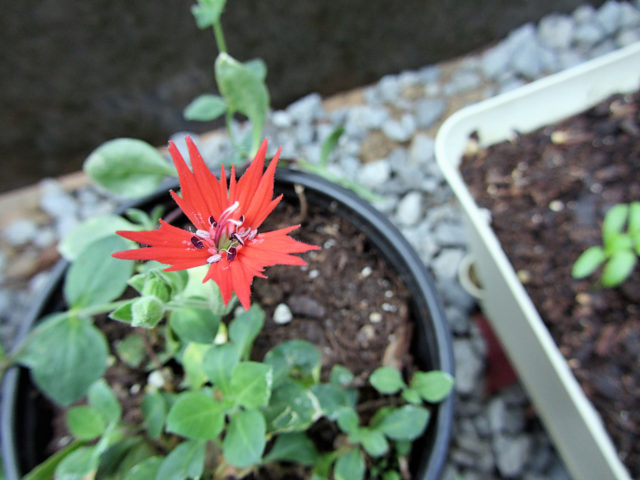 Graffiti: While researching this article, I came across two issues facing Leo Petroglyph State Memorial. One is graffiti. The site is operated by the Ohio Historical Society in partnership with the Friends of Buckeye Furnace, but it is not staffed round-the-clock. So it’s possible for vandals to enter the park and work their damage. I believe most of the graffiti has been spray paint applied to the rock outcroppings along the nature trail, but some damage has also been done to the area where the petroglyphs are. Last April volunteers spent 22 hours trying to scrub paint off the outcroppings without destroying all the lichens that were painted over as well.

Dying hemlocks: The other problem is one of microclimate. Because the natural area of the park is so small, it has been affected by decisions made by the owners of adjoining property. Because trees were felled on property to the west of the park, the microclimate in the park became drier and warmer. Sadly this slight change was sufficient to make the western side of the park inhospitable for hemlock trees. The hemlocks are dying off, and no new hemlocks are sprouting here. In an effort to remedy this situation, the Ohio Historical Society is trying to raise funds to buy property to create a larger, natural buffer from the western winds.