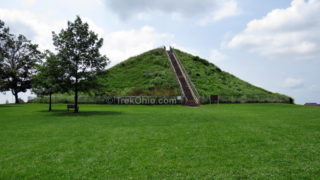 No one knows the their name. They left no written record. Today we call them the Adena Culture and we know they had a thriving civilization in Ohio between 1000 BC and 200 BC. They built hundreds of earthen mounds, probably as part of a funeral ritual. The largest of these mounds is a 65 foot tall mound situated on a hill overlooking the Miami River in Miamisburg, OH. The mound was partially excavated and a bark covered skeleton was discovered. The Miamisburg mound has never been END_OF_DOCUMENT_TOKEN_TO_BE_REPLACED