This Metro Park gets its name from a tree that has largely disappeared from North America: the American chestnut tree (Castanea dentata). The American chestnut tree dominated America’s forests in the east and in the Ohio Valley until the start of the 20th century. A true giant, the tree grew to be 100 to 150 feet tall (30 to 45 meters) and up to 10 feet (3 m) in diameter. It crowned the ridgeline of the Appalachian mountains; when in bloom, its white blossoms made the mountains look as though they were capped with snow.


However in 1904 a type of fungus, Endothia parasitica, arrived from Asia. It started a Chestnut blight epidemic that killed three billion trees. A small number of trees escaped the blight, usually because they were living in isolation since they had been transplanted outside of their native range. However a few mature trees have been discovered within their native range, including in Ohio. Four mature, flowering trees have been discovered near Braceville, Ohio, and one mature Chestnut tree has been discovered in a marsh near Lake Erie (but the Ohio Department of Natural Resources is keeping its location secret). Sadly in Chestnut Ridge Metro Park, as in most of Ohio, if you see a remnant of this once great tree, it most likely will look like the shrubby, little thing pictured below. These are root sprouts of a Chestnut tree stump. Although the stump continues to put out sprouts, the sprouts continually become infected, so the specimen below will never resemble a real tree. 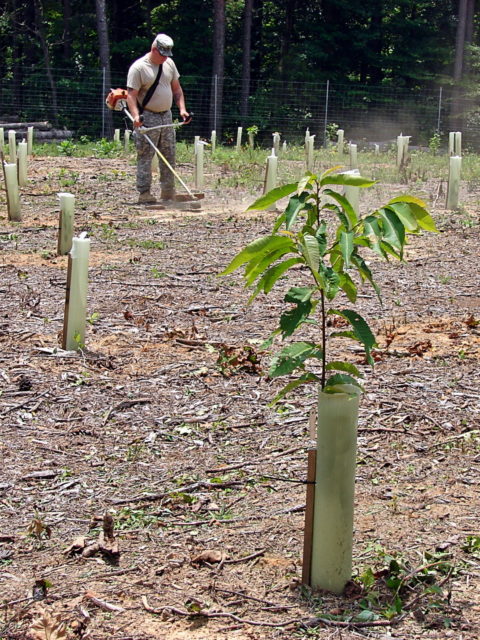 Turning from the park’s namesake to the park itself, Chestnut Ridge Metro Park is located in Fairfield County just southeast of Columbus. We’ve been there twice: in winter and in late spring. There is a hiking trail that’s a 2.4-mile loop. It starts at the parking lot and traverses a forested, 150-foot ridge, then skirts along the edge of a large meadow and finally passes through a small forest before returning to the parking lot. Chestnut ridge is considered to be the first ridge in the western foothills of the Appalachian mountains. There are a couple of viewing platforms just off the steeper portions of the trail as well as a boardwalk skirting the hillside. From one of the platforms you’re supposed to be able to see the Columbus skyline in the distance; however, we couldn’t see it. During our winter hike it was cloudy with poor visibility, and during our spring hike there was already too much foliage blocking our view. Since this area was once deforested and used for farmland, it is occasionally possible to see signs that people once lived here, such as the remnant of an orchard.

Not far from the parking lot there is a wetland with an observation platform, as well as nesting boxes for colonies of purple martins. The park’s mixture of habitat makes for excellent bird watching opportunities. The non-boardwalk portion of the trail is packed sand and gravel and seems to be very popular with joggers. In addition to this hiking trail there is a 7.5 mile trail dedicated exclusively to mountain biking. I’ve heard that it’s spectacular, but since we don’t mountain bike we haven’t tried it ourselves.

Other park facilities include picnic shelters, grills, rest-rooms, and a children’s playground. There’s also a fishing area that’s for the exclusive use of children and seniors (under 16 or over 59 years of age).