The city park has trails that pass through meadow and woodlands. The meadow trail is a mown path; The woodland trail is a wide trail with a mulch base that often follows a small creek. The city seems to be expanding their trail system, especially the mown paths. I encountered more trail branches than the map in the kiosk showed. A few branches off the main trail ended in pleasant surprises, such as the bench pictured above or the picnic table below.

The shade in the wooded portion of the trail gave some relief for hikers on a hot summer’s day.

The treeline and meadows were decked out in flowers.

I only recently learned from Steve Willson in one of his posts at Blue Jay Barrrens that teasel is a non-native plant. Steve is actively trying to remove it from Blue Jay Barrens, and the post that I just linked to explains how to do so. I see teasel in just about every wild field in central Ohio, so I was really surprised to learn that it was not native.

The burdock pictured above is often confused with thistle. There are two readily observable differences:

This state nature preserve protects central Ohio’s best remaining complex of vernal pools and button bush swamps. One of these swamps contains Ohio’s only known population of cypress-knee sedge (sedge has a grass-like appearance, but unlike grass the stems have edges). Had I been visiting during the spring I would have seen lots of wet, swampy areas during my hike. However since I was there in August after a summer-long drought, I didn’t see any standing water. One of the downsides of visiting in the summer is that I apparently missed an impressive display of spring flowers. With that said, let’s see how it looks in August.

As soon as you cross the bridge into the preserve you are on the Woodland Pond Trail. This is a loop trail. During wetter weather this trail would pass by a number of marshy areas and vernal pools. To help keep your feet dry, much of this trail consists of a boardwalk.

There is a second loop, the Beechwood Trail, that leaves and rejoins the Woodland Pond Trail. This area of the preserve is higher and drier. During the spring there are supposed to be abundant wildflowers. Since this is a drier area, the trail is mainly packed dirt. 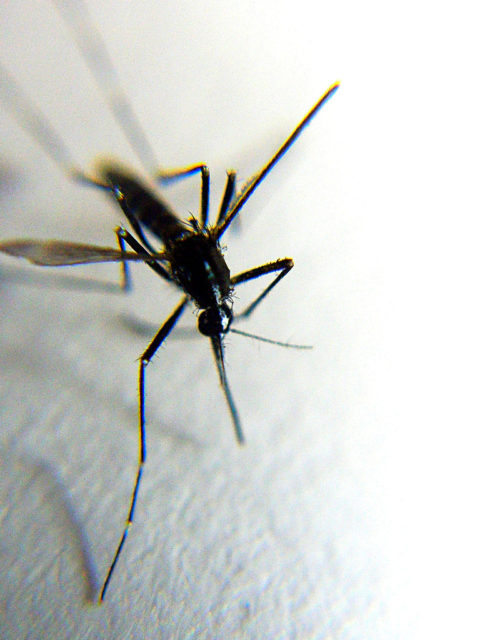 Both because this is such an urban nature preserve and because it’s been so very dry, I didn’t even think to bring DEET with me. Mistake! I got several mosquito bites while hiking in Gahanna Woods, mostly through my tee so I didn’t even know it was happening at the time. I puzzled over this afterwards. Below you see one of the dry stream beds that ran parallel to the trail in the city park. Perhaps little pockets of standing water were hidden between and under the rocks making this “dry” stream even more conducive to breeding mosquitoes than a running stream would have been. Who knows? At any rate if you’re visiting the park during warm weather, I recommend either applying DEET or wearing long sleeves and pants.