Marblehead Lighthouse State Park is a 9 acre state park containing the oldest lighthouse in continuous operation in the United States. The lighthouse is located on the Marblehead Peninsula on the shoreline of Lake Erie.

Lake Erie is part of a chain of five giant fresh water lakes formed during the end of the last Ice Age. With a surface area of 9,910 square miles (25,700 km2), it is the world’s eleventh largest lake in terms of surface area and twelfth in terms of volume. It is 210 miles long (338 km) and 57 miles wide (92 km), with a shoreline that’s 871 miles long (1402 km). Lake Erie is the most southern and most shallow of the Great Lakes with an average depth of 62 ft (18.9 m) and a maximum depth of 210 ft (64 m). The relatively shallow depth makes Lake Erie the warmest of the Great Lakes, and it also means that the water moves through this lake faster than any of the other Great Lakes. All of the water in the lake is completely replaced every three years.

The warm, circulating water makes Lake Erie the most biologically active lake of the Great Lakes. The western basin of Lake Erie is the shallowest part of the lake with average depths of 25 to 30 feet (7.6 to 9.1 m), and this part of the lake is known as the “Walleye capital of the world.” Walleyes can be caught off shore in early spring and late fall. You are allowed to fish from the shores of the Marblehead Lighthouse State Park. In the summer the walleyes move into deeper, cooler water, and you would need a boat to fish for them then. 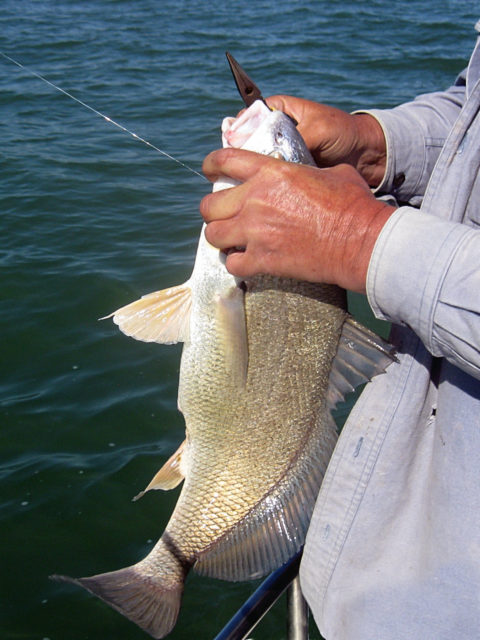 Throughout American history, the Great Lakes have been important for transportation and commerce. In 1819, the US Congress authorized money for construction of lighthouses on the Great Lakes. Marblehead lighthouse was completed and became operational in 1822.

The 65 foot (20m) lighthouse tower is built out of limestone quarried from the peninsula, and it is covered with stucco. The original light used 13 whale oil lamps backed by metal reflectors. In the mid 19th century these lamps were replaced with a kerosene lamp. The lighthouse went electric in 1923 and was automated in 1958. It currently has 300 mm light that flashes a green beam every six seconds. Green is used to distinguish it from white, aerial lights. The lighthouse’s beam can be seen from more than 11 nautical miles away. Since commercial boats now use GPS and other advanced, electronic navigational aids, the lighthouse is now mostly a benefit to recreational boaters.

The property was purchased by Ohio and in 1998 became Ohio’s 73rd state park. The US Coast Guard continues to operate and maintain the light.

The park features a parking area, rest rooms, picnic tables, the lighthouse, and museum. The lighthouse and museum are open in the summer. Under Additional reading below there is a link to page giving the current hours of operation.

The park is in Ottawa County at 110 Lighthouse Drive, Marblehead, OH 43440; please see the entry in our guide for Ottawa County for further site information.