Bob and I have hiked many trails in the nature preserves and parks of Ohio. However the state of Ohio also has designated “State Wildlife Areas” that are under the management of the Ohio Department of Natural Resources. These are important areas for hunting and fishing in Ohio, but they aren’t usually geared toward hiking and most of them lack trails. However some of these State Wildlife Areas do have trails, especially those that are good sites for birding.

Historically this land was leased from the 1920s through 1950 by a private club who used the marsh for waterfowl hunting. In 1951 the Ohio Department of Natural Resources bought the land and created this 2,202-acre wildlife area. A couple of decades after this purchase the building shown in the topmost photo was erected. It’s called the Sportsmen’s Migratory Bird Center because it was funded entirely via taxes and licensing fees paid by those hunting and fishing.

The second floor of the Sportsmen’s Migratory Bird Center houses the Crane Creek Wildlife Research Station. This research station is in charge of wetland-related research and management for the state. Among other projects they spearheaded the state’s effort to reintroduce osprey in Ohio, a topic that we discussed in our post, Return of the Osprey to Hoover Reservoir. During the 1960s this research center also worked on the development of a Canada Goose breeding program. The wildlife area’s official site notes that Ohio has the most successful Canada Goose production program in the nation

… which brings to mind our post, So Many Canada Geese.

The lower level of the Sportsmen’s Migratory Bird Center is fully accessible and open to visitors at Magee Marsh. Among other things it contains terrariums, aquariums, an extensive wildlife habitat display, children’s exhibits with touchable wildlife items, and an extensive collection of antique hunting artifacts. The hunting artifacts include the antique waterfowl decoys displayed around the walls of the building as seen in the photo below.

There is fishing access and a small boat launch off the Turtle Creek Access Drive, 1.5 miles east of the main entrance. In addition the beach at Crane Creek State Park (shown in the embedded map at the bottom of this post) is no longer a swimming beach. Although Google Maps still refers to this area as “Crane Creek State Park”, in 2008 this state park was handed over to the Ohio Division of Wildlife and became part of Magee Marsh. Since it is now part of a wildlife area, the beach is used for fishing and wildlife viewing.

Controlled deer and waterfowl hunts are held at Magee Marsh. If I understand it correctly, hunters bid on a permit to hunt in this area, and the permits are awarded lottery-style. In addition to the usual hunting laws, additional hunting restrictions are in force at Magee Marsh. To see a sample letter sent to those awarded a permit, check out this PDF file published at the ODNR site; it lists the additional restrictions for waterfowl hunting

Special youth hunts for deer and waterfowl are held at Magee Marsh. As you might have guessed, these hunts are also restricted to permit holders.

There is some opportunity to do furbearer trapping at Magee Marsh for those who are able to obtain a special permit.

Although many state wildlife areas don’t have trails, Magee Marsh has trails, a boardwalk, a bird blind and observation towers. If you plan on exploring the trails at Magee Marsh, I strongly recommend that you get the trail maps (which include trail descriptions) that the Black Swamp Bird Observatory publishes at their site. I didn’t discover their maps until after our visit to Magee Marsh, and it turns out that there are a lot more trails through the marsh than I had realized. There’s even one connecting Magee Marsh Wildlife Area to the adjacent Ottawa National Wildlife Refuge. Alternatively once your arrive at Magee Marsh, you can get trail information from the staff at the Sportsmen’s Migratory Bird Center.

Near the Sportsmen’s Migratory Bird Center there is a double loop trail known as the Magee Marsh Walking Trail that features a 42-foot tall observation tower. I was disappointed that both the eastern loop and the observation tower were off-limits during our visit, but it was hard to be too disappointed once I learned why the entrance was barred. A mated pair of eagles had decided to nest nearby, and the trail was blocked off to increase the chances of their reproductive success. As a consolation prize eagles soared over our heads while we explored the marsh.

The Magee boardwalk trail is a real treat. It stretches on 1.5 miles through 37 acres of swamp near the Lake Erie shore. The boardwalk is fully accessible and contains two loops. There is also an observation tower and viewing platform. To see photos of the boardwalk, check out our previous post. By the way, the construction of the boardwalk was paid for by people buying wildlife license plates or by sending the state government a little extra money via their state income tax forms by checking off the “Do Something Wild” contribution.

From the parking lot near the eastern entrance to the boardwalk, it’s a short walk to the Lake Erie shore.

On the Shore of Lake Erie

It turns out there was a Wildlife Beach Trail beyond the point pictured below. I didn’t know about it until I discovered the BSBO maps after I returned home.

The BSBO has a building near the entrance to Magee Marsh. We didn’t stop by this trip, but their website was chock brimming with birding information (the BSBO is linked to under Additional reading near the end of this post) 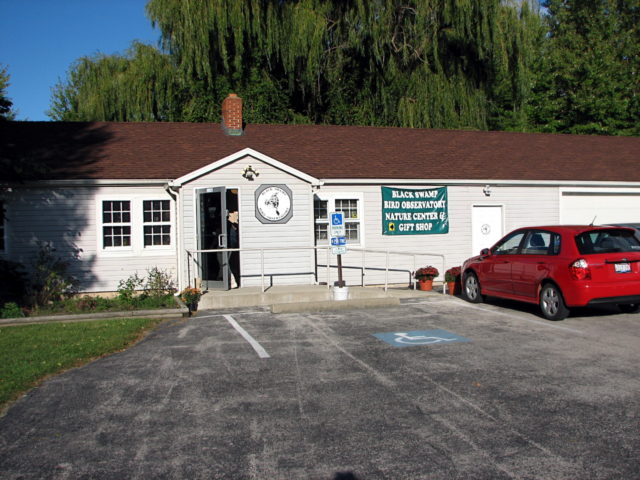 While we were there a non-profit organization, Back to the Wild, was sponsoring an educational exhibit across from the Sportsmen’s Migratory Bird Center. This group rescues and rehabilitates wildlife, especially raptors. The ones participating in educational presentations typically have injuries that prevent them returning to the wild and will remain in the care of this organization for the rest of their lives. Back to the Wild is supported entirely by donations and receives no government funding. If you’d like to contribute, check out their website under Additional reading below.

Unless Google Maps let me down, you should see three markers (icons) on the map that follows.

By using the Google Map below, you can get directions to Magee Marsh from your point of origin. If you click on the “View Larger Map” link below the embedded map, it might be easier to work with. I’ve noticed if you do this using an Android device, it will open Google Maps and from there you can go on to the Navigation app.