Oak Openings Metro Park is a 4,000 acre metro park in Lucas county. It has over 30 miles of well-marked hiking trails over some of the state’s most interesting and diverse terrain. It features many varieties of plants, and it is on the main path for seasonal bird migration. Oak openings also has sand dunes despite being miles from the nearest large body of water. How the sand dunes got there is an interesting story in itself.


The History and Habitat

Twenty one thousand years ago, much of what is today Ohio was covered by a sheet of ice known as the Wisconsin Glacier. In northern Ohio, the ice sheet was a mile thick. As the current inter-glacial period began this enormous mass of ice began to melt. The melting glacier produced water – a lot of water. As the glacier melted, a series of huge lakes were formed, the last of which was named Lake Warren.

Lake Warren included all of what is today Lake Erie, much of northwest Ohio and portions of neighboring Indiana. Lake Warren had sandy beaches as well as dune covered barrier islands. About 11,000 years ago, the waters of Lake Warren receded leaving behind modern Lake Erie and an enormous swamp surrounding the remnants of the barrier islands. The swamp measured 120 miles long and 40 miles wide. Early settlers viewed the swamp as an often impenetrable, malaria-ridden barrier.

However, within the Great Black Swamp, there was one area that was free of swamp. It was an oak-covered savanna with occasional sand dunes. Lightning sparked frequent, naturally occurring fires that helped to keep the area from turning into forest. It is also believed that Native Americans did controlled-burns to keep the open areas open. The relatively fire-resistant oaks that survived actually thrived in the well-drained, sandy soil. The settlers traveling through this region called it the “Oak Openings”. It was a welcome relief to those who had crossed the swamp.

By the 1850’s Ohioans began draining the Great Black Swamp, converting it to rich farmland. By the start of the 20th century, it was mostly gone.  Little remains of the Great Black Swamp today, except remnants of its Oak / Hemlock forest – such as the forest in Pearson Metropark.  [Updated text – my thanks to Tom Arbour (see comment below) for his clarification]

Today, a small portion of the Oak Openings savanna is preserved at the 4,000-acre Oak Openings Metro Park. There you can explore the unusual oak savanna habitat and visit sand dunes that still shift with the wind.

The habitat, oak openings, is sometimes referred to as Black oak openings in reference to the tree whose foliage is shown below. Check out its red, fuzzy leaves.

These are fresh, spring leaves. As the leaves mature they turn green. This fuzziness is a plant adaptation that slows the tree’s loss of moisture through its leaves. Conserving moisture is important for saplings growing in sand since rainwater will soon sink below the reach of its roots.

Since we were in the Oak Openings in May we also had an opportunity to view the spring wildflowers there. The region is widely known for its wild lupine which is pictured at the top of this post. Let’s take a closer look at it.

The wild lupine is an important food source for the federally endangered Karner blue butterfly. Although this butterfly had disappeared from Ohio, the Toledo Zoo reared one hundred of them. In 2007 these butterflies were released into the wild at the Oak Openings Preserve. We didn’t see one ourselves, but below is a photo which Coralie Mrsroadrunner published of this species under a Creative Commons license. 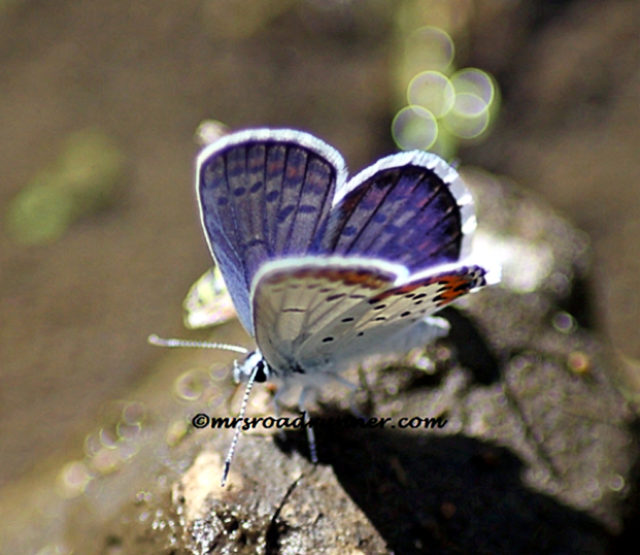 May Flowers, Ferns, and Animals

Below are a couple of other wildflowers that we saw in May.

One of the most striking features of the vegetation at Oak Openings was the abundance of ferns.

The Oak Openings is a year-round destination for birders. We saw a number of birds, including the colorful Indigo bunting.

We also saw deer and squirrels.

The park features over 30 miles of hiking trails, including a 15 mile backpack trail, 5 miles of paved bike path, and 22 miles of bridle trails. This is the only park in the Toledo Metropark system that offers bridle trails. There is also a connector trail to the regional Wabash Cannonball hike/bike trail. In the winter, Oak Openings has designated trails for cross-country skiing.

We started our exploration at the Buehner Center. This building and its surroundings include exhibits describing the area, a wildlife observation area, a playground, picnic shelters, and restrooms. It is also the trail head for several hiking trails, and a pond lies a short distance beyond it.

Our time was limited so we hiked the 1.7 mile Sand Dunes Trail and the 1.9 mile Evergreen Trail. The Sand Dunes Trail took us to some of the dunes left over from the Lake Warren barrier island. It was a unique experience seeing sand dunes unaccompanied by any bodies of water. The Evergreen Trail traverses a pine plantation and then passes through prairie and savanna habitats. Had we more time, we could have spent many days exploring this unique park.

Dogs are permitted at the park and we saw a lot of people out walking with their pooch. Owners are required to clean up after their dogs and to keep them on a leash.