Butterflies with elegant projections extending from their hind wings are known as “swallowtails”; the swallowtails can be seen clearly below. However as a butterfly ages, the outer edges of its wings start to wear away. The thin, little swallowtails are usually the first to go. So you may find yourself looking at a swallowtail species without seeing any swallowtails at all. The “tiger” part of this butterfly’s name comes from the four black stripes that start at the outer, front edge of its wings

It’s easy to distinguish between the male and female butterflies belonging to the Eastern Tiger Swallowtail species. The above photo is a female representative of the species as viewed from the top. The underside of a female’s wings can be seen below.


Now let’s look at some males.

As beautiful as the male is, the female is the showier of the two. Her hind wings have a prominent band of blue with bright orange accents when viewed from the top. The areas that are blue on the female are black on the male, although its possible for the male to have some tiny flecks of blue. I’m told that the female is larger than the male, but I don’t think I’d ever pick up on that in the field.

All the areas of the wing that were yellow before are black in these last two photos. Even the body that was yellow with longitudinal black stripes is now just black. Because the female has two, different looks, she is dimorphic, and the black version is called the dark morph.

Well, once I got that down I thought I was all set to identify Eastern Tiger Swallowtails in the field like the one below.

Hmm. I thought I had this down. The butterfly above is definitely a swallowtail, but I guess if I compare it to the dark morph, it has way too much yellow. The dark morph of the Eastern Tiger Swallowtail has a tiny row of light dots near the outer edge of its wings, but the butterfly above has two bands of large yellow dots accenting its outer wings. Plus the body also has yellow dots. That makes it a different species altogether; it’s a Black Swallowtail.

Okay, I think I have it now. If I see a black butterfly with blue on its hind wings and two rows of large, yellow dots around its wings’ edges, it’s a Black Swallowtail. But if it’s black with blue on its hind wings and just a row of tiny, light dots around the edge of its wing, then it’s a dark morph of the Eastern Tiger Swallowtail. So the next photo must be a dark morph whose swallowtails have worn off.

But wait! The dark areas of the front wings seem to have some red mixed in with them. So this can’t be an Eastern Tiger Swallowtail.

The reddish spots make this a Red-spotted purple butterfly. It’s not a swallowtail at all. It’s actually easier to see the red spots on the underside of its wings.

Okay, give me a moment to pull myself together… all right, I’m ready to push on. It turns out that I have never even seen a Pipevine Swallowtail, but after looking at the distribution map published on this page, it’s clear that it is all over Ohio. So I traipsed on over to Flickr to see what photos of Pipevine Swallowtails had been published under a Creative Commons license, and I came up with this one published by Anita Ritenour. 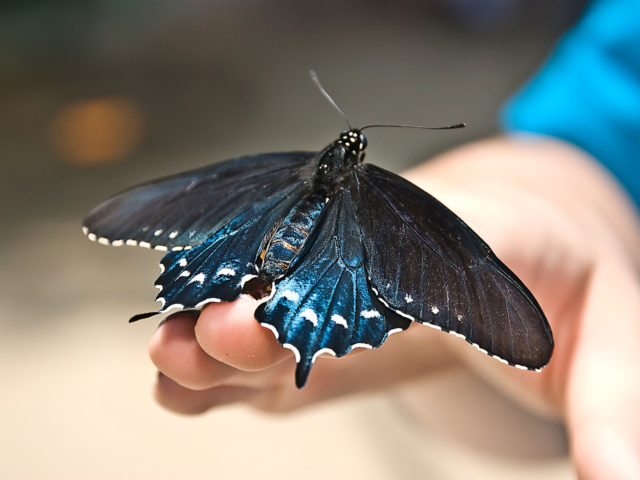 The Pipevine Swallowtail is poisonous to eat, not to the touch.
So this child is in no danger.

Okay, I can see why the resemblance would confuse a bird because it kind of confuses me.

If you see it lift its wings, the difference between the two becomes even more pronounced because the Pipevine Swallowtail has large red spots on the underside of its wings and white spots on its body, while the dark morph does not. Here’s another photo from Flickr published under a Creative Commons license by Mike Baird. 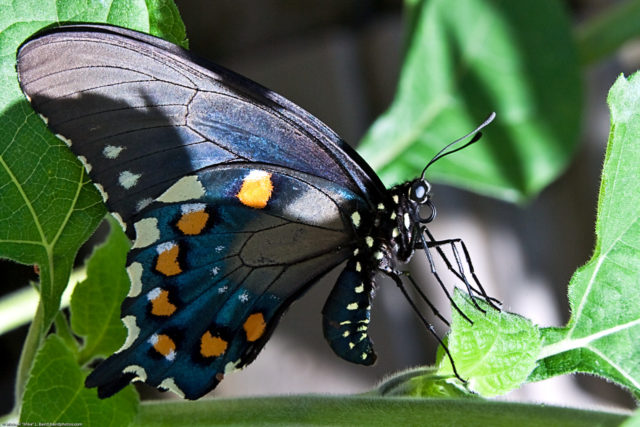 I will leave it as an exercise for the reader to distinguish between the red spots on the underside of the Pipevine Swallowtail and those on the Red-spotted purple butterfly. And with that I conclude today’s lesson.

Almost as soon as I published this, Karen of Karen’s Nature Art wrote in to point out that the Spicebush Swallowtail also resembles the dark morph of the Eastern Tiger Swallowtail, and that the two of them are trying to mimic the poisonous Pipevine Swallowtail.

This sent me staggering over to Flickr to see what the Spicebush Swallowtail looks like. The photo below was published by BobIsTraveling under a Creative Commons License. 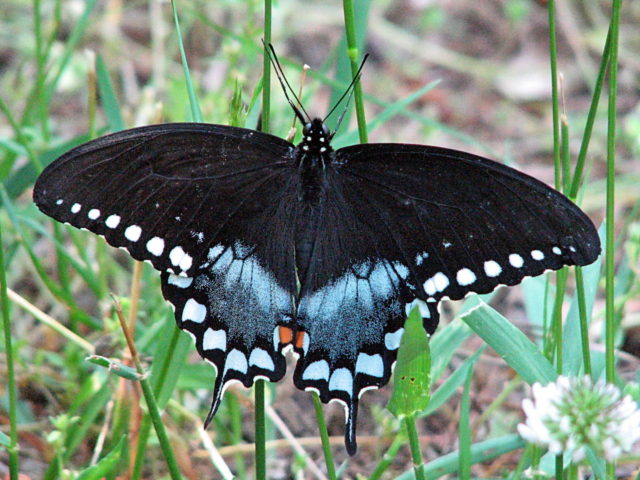 Below Barb Dunlap published a photo of a Spicebush Swallowtail that shows the underside of its wings. 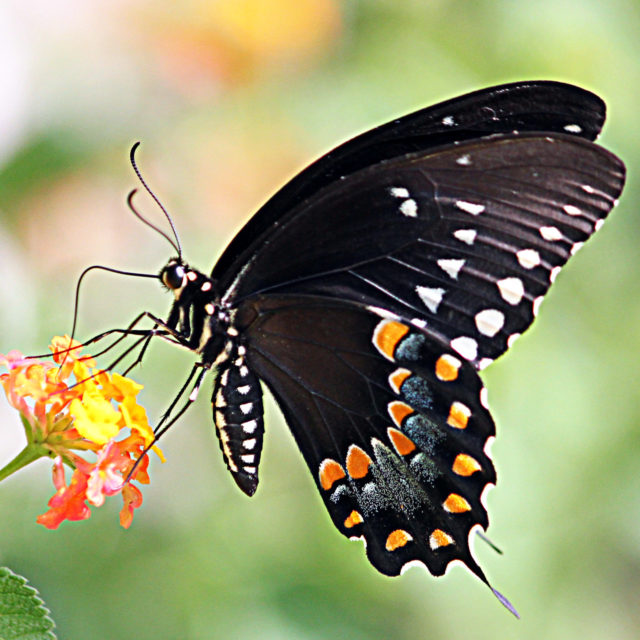 And while I was looking around, I discovered that the caterpillar of the Spicebush Swallowtail has the cutest, fake face ever. Check it out below.