While hiking at Tar Hollow this past weekend, we spotted a Luna moth perched on a burnt tree trunk. After studying its photo I realized that we now had photos of both the male and female Luna moth, so I thought I would share with you how to tell the difference between the two genders, plus provide a little background information on this moth. However when I showed the photo to some other people, they were soon telling me that the moth looked like it was about two feet wide. So before going on, try clicking on the photo below to behold its immense size.


As it turns out, the Luna moth is a really large moth, but no, it’s not two-feet wide. The wingspan typically varies from 3 to 4½ inches, although according to Wikipedia there was one sighted that had a wingspan of 7 inches. The problem with the above photo is that there’s nothing to provide scale, so I took another photo of the moth with a friend’s hand held near it, so you could compare sizes.

If you noticed a difference in the wings, you have sharp eyes, but that’s because the female that I photographed at the top had some sort of mutant variation on its right wing. A lot of moth species have what are known as eyespots on their wings. The idea is to trick potential predators into thinking that they are looking at the head of some large animal. The eyespots on the forewing (the ones on top) are supposed to look like the one on the left. Something crazy happened to the one on the right that kind of ruined the entire trick.

As it turns out, the hindwings (under and to the rear of the forewings), also have eyespots, potentially creating even more confusion. I have not had an opportunity to photograph a Luna moth with its wings spread wide enough to see them, so I’m going to share a photo published by Julie under a Creative Commons license. 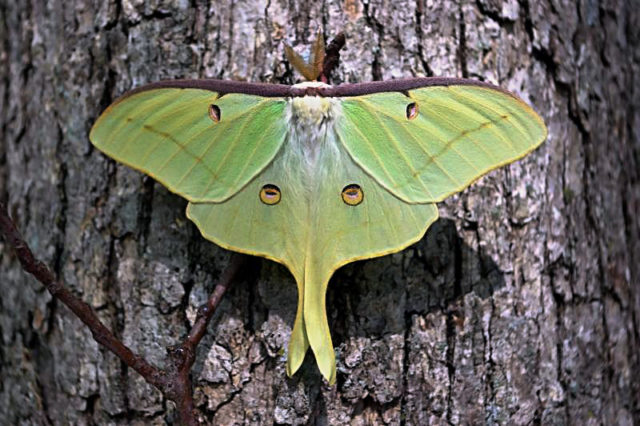 So now that we’ve got the eyespots out of the way, when you are trying to distinguish between the two genders what you really want to be looking at are the antennae. The male has wide, luxuriant antennae, while the female has narrow, spindly little things. Below you can see a side-by-side comparison.

The differences between the two gender’s antennae reflect the species’ reproductive strategy. When the Luna moth caterpillar is fat and happy, it buries itself in leaf litter and makes a cocoon under the leaves. After transforming into an adult moth it digs itself out of the leaf litter and climbs up a nearby object. At first its wings are wet and rumpled. It has to beat them open and dry them. And here’s where the first behavioral difference between the male and female moths emerge. 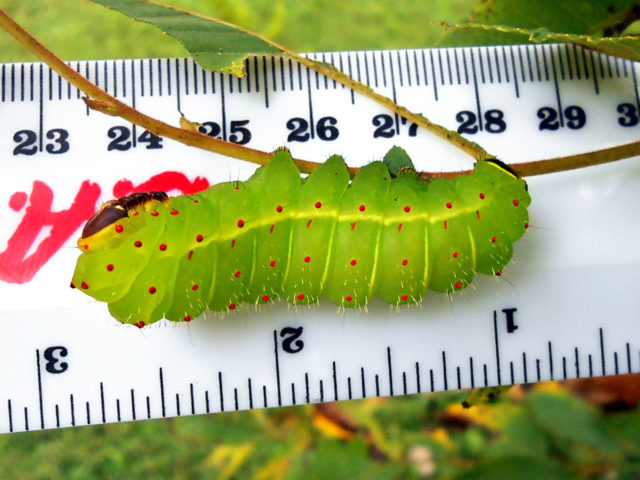 Once the female moth’s wings are dry and fully extended, she doesn’t fly anywhere. She stays exactly where she was when her wings dried. What she does start doing is pumping out pheromones to signal to a male that she’s ready to mate. The male’s antennae are wide and luxuriant because he uses them to find the source of the female pheromones wafting through the air. Since the male does all the seeking while the female stays put, her antennae are not as developed as his.

After mating another behavioral difference distinguishes the male and female moths. The female stops emitting pheromones and will never mate again. In contrast the male will fly about trying to find and mate with additional females. He has about a week to find as many females as he can. Why such a short time? He’s got a wee, little, vestigial mouth and no digestive tract. As an adult moth he will subsist entirely on fat that he laid down while he was a caterpillar. When he exhausts this store in about a week he will die. Although Luna moth are a fairly common moth, they are rarely seen because their lifespan in their adult form is so brief. 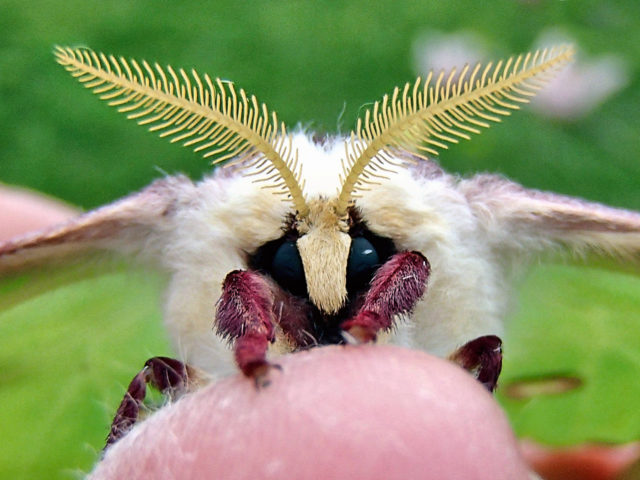 Face of male luna moth; he has a tiny, useless mouth. 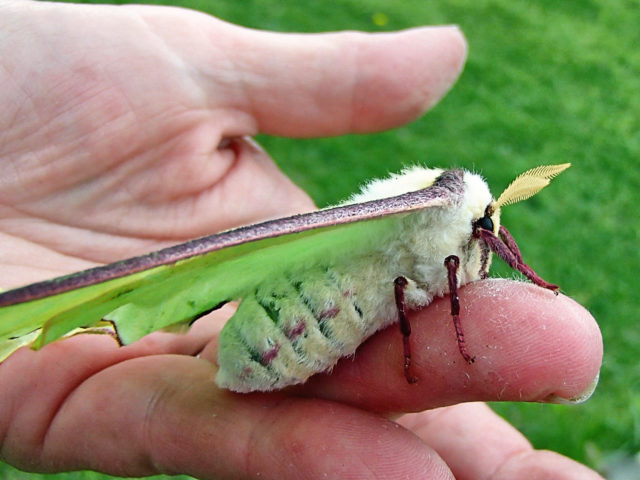 What a fat body this male moth has, and he’s going to need that fat because he can’t eat.

While the male Luna moth continues looking for females, after mating the female Luna moth flies for the first time. Her mission for the last week of her life is to distribute her eggs far and wide. She will lay 4 to 7 eggs on the underside of a leaf, move on to another leaf and repeat this process until she has laid 400 to 600 eggs in total. The trees and plants where she lays the eggs are called the host plants. For the Luna moth these host plants include alder, cherry, walnut, hickory, oak, elm, linden, poplar, willow, sweet gum, birch, butternut, beech, chestnut, pecan, hazelnut, and persimmon. With such a wide variety of host plants to choose from, you’d think they’d be everywhere. However for reasons that are not fully understood, it is believed their population has been declining in cities and larger towns. Your best bet for seeing one is in forests and suburban areas with large trees.

In Ohio the Luna moth can carry out two reproductive cycles per year. They overwinter as pupae in their cocoons buried in leaf litter beneath the snow.

10 thoughts on “The Luna Moth: Male and Female”