In February 2014 we visited Greenville Falls State Scenic River Area, north of Dayton. It is a 92-acre park, owned by the Ohio Department of Natural Resources but managed by the Miami County Part District. The falls consist of a scenic, 20-foot cascade in Greenville Creek. The park also features ruins of historical interest, nearly a mile of trail, access to fishing spots, a limestone natural arch, picnic areas, kiosks, interpretive signs, and a port-a-potty.


Richard M. Albery, Sr. and his two sons formed the Falls Electric Company and built a wooden dam in 1897 to provide the area with hydro-electric power. It was one of the first hydro-electric plants in the state. It provided electricity to Covington, and later to Pleasant Hill and Ludlow Falls. It also brought electricity to nearby rural regions. The hundreds of farmers lucky enough to reside in Stillwater Valley were able to enjoy electrical power long before the remainder of the county.

Below is a map of the park that I excerpted from the brochure of the park published by the Miami County Park District. It points out where the historical ruins and other features are located.

From the Falls Overlook Platform, you get a closeup view of the falls. If you look downstream across the creek, you can also see the ruins of hydro-electric plant.

Below is another photo from an interpretive sign showing about the same area back when the power plant was in operation.

Note the covered bridge in the above photo. Although this bridge was replaced by a regular, modern bridge, not too far from the park is another covered bridge.

Returning to the park, upstream from the Falls Observation Platform on the same side (western) of the creek, you can see the remains of the dam. It’s the angled, wooden boards at the far end.

Across the creek on the eastern side, you can see that there are other additional ruins associated with the dam. It was on the eastern side that there was machinery to divert water into a sluice (which is a sort of narrow canal) that would carry water to the electrical power plant on the same side of the creek. This area is referred to as “Sluice gate” on the park map. At this point we backtracked to the road, used the bridge to cross the creek, and entered the other entrance to the park so that we could investigate the eastern side of the park.

The photo below was on an interpretive sign at the park. It shows what the wooden dam used to look like when it was in operation. Although the face of the person is obscured in the photo, the individual is Richard Albery. Albery is standing on the western side of the creek in this photo. Across the creek in the upper right corner of the photo, you can see the bottom of the “ice lift.” In the winter employees of My. Albery cut large blocks of ice from the pond that was created by the dam. They were moved from the pond to the “ice house” by means of the ice lift.

In another photo of one of the park’s interpretive signs, you can see the old ice lift in operation as it is being used to move freshly cut ice blocks onto a conveyor belt. The ice would be moved to the ice house where it was warehoused.

The ice was moved from the pond to the “ice house”. Each ice block was surrouned by straw and sawdust to keep them from fusing together. The sheer volume of ice kept the temperature within the ice house below freezing, so the ice would remain frozen throughout the summer. The ice house is gone but you can still see its foundation nearby.

You might be wondering what was the point of warehousing the previous winter’s ice. Back before refrigerators were common, people used iceboxes to keep their perishables cold. People who subscribed to the service would receive ice deliveries for their ice boxes. Iceboxes were much like coolers. To let the service know how many of these large ice blocks they needed, they would place a card in their window with the number desired. Typically families would have to replace ice twice a week. 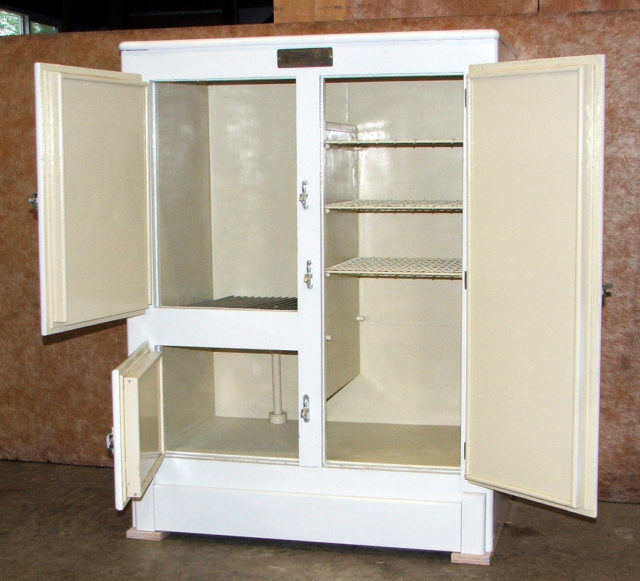 This is an example of an antique ice box. In this model, the ice would have been placed in the upper left compartment. Below you can see a pipe so as the ice melted the water could be captured in a pan below the icebox. Dairy products were placed immediately under the ice while other food went to the right.

At this point we went to investigate what was left of the electrical plant, referred to as the “Albery Mill and Power Plant” on the park’s map.

And below is a sketch of the electric company when it was functioning.

And here is a photo from another interpetive sign showing the power plant to the left, and in the distance to the right, the functioning, wooden, dam.

From the ruins of the power plant, you can catch a glimpse of the limestone natural arch that is on the opposite bank of the creek. Unfortunately from this vantage point it just looks like a cave; however, it open on the top making an arch.

One of the interpretive signs shows the arched photographed from below it (possibly in a boat?).

There were steps leading down to the creek level near the power plant ruins, but due to the ice and snow we felt it would have been dangerous to descend these steps while we were there. However it is possible that you might get a better view of the arch were you descend them in better weather.

As you could see from the photo of the arch, certain parts of the creek’s shoreline consists of steep cliffs as also shown below.

Once we got home we learned that shortly after we left a woman died while taking photographs around the creek. It sounded as though she slipped while taking a photo on a gentle, snowy slope near the creek’s edge, possibly in the area referred to as “Dam remnants”. Once she was in the frigid, fast-moving water, she drowned. The report said that this was the only known death to occur in the park. Our thoughts and prayers go out to the victim’s loved ones. Please use caution when near rushing water while the ground is wet, snowy or icy.