Last week we went to Magee Marsh to check out the action at the Biggest Week in American Birding. This was the second time we made an appearance (the first time is described here). This event is set up to celebrate and observe the migration of warblers in their colorful breeding plumage. Many species are on their way north, but their trip is delayed by Lake Erie. Before these small birds attempt to fly over the lake, they stop on Lake Erie’s southern shore to fatten up on bugs, so they’ll have the fuel they need to make it across.


The boardwalk itself is quite nice with many renovated portions. It is handicap accessible, and we saw several birders using their wheelchairs on it. Below is one of two entrances.

Shortly after we got there in the morning we ran into a very congested portion. A particularly exciting bird had been spotted, and everyone wanted to see it. However the crowd itself prevented people on the fringes from seeing anything, and it really wasn’t possible to pass through the thick of the crowd. We just had to wait for other people to move on.

Most of the congestion that we encountered occurred near the entrance and in the early morning. As we finally moved on and the day grew later, the crowds thinned out considerably. Nonetheless, wherever people were gathering, it was very likely that some bird of interest was nearby. As we experienced during our first visit, most people were very helpful in pointing out the direction to look to see a particular bird. They were also very helpful in identifying the bird’s species which was a big help to less knowledgeable birders such as ourselves.

One of the nice things about Magee Marsh is that the nearby trees and shrubs tend not to be very tall. So that means the little birds who are flying about there are much lower and easier to see than in many other places. Below I’m going to share photos of some of the birds that I spotted there. All were hand-held shots taken with my point-and-shoot camera.

I saw a number of warblers eating insects. Because they were focused on hunting out bugs, there were continually flitting from here to there, so having one sit still long enough to get a photo was challenging. However once in a while one would stop to sing.

I had posted the above photo at the Facebook group, Birding Ohio, and because the top of his head had been roughed up, several people recognized him and also had taken photos of him. Apparently he had found a nesting cavity that he had claimed for himself and his prospective mate, but other prothonotary warblers drove him out. In the course of this bullying, they pecked his head injuring it somewhat and causing some of the feathers to stick up.

By the way, if you have a Facebook account, and you have some interest in birding, the Birding Ohio group is very helpful. It’s a closed group, so you have to request a membership. I saw a couple birds that I was having trouble identifying, and the people in this group were very helpful. 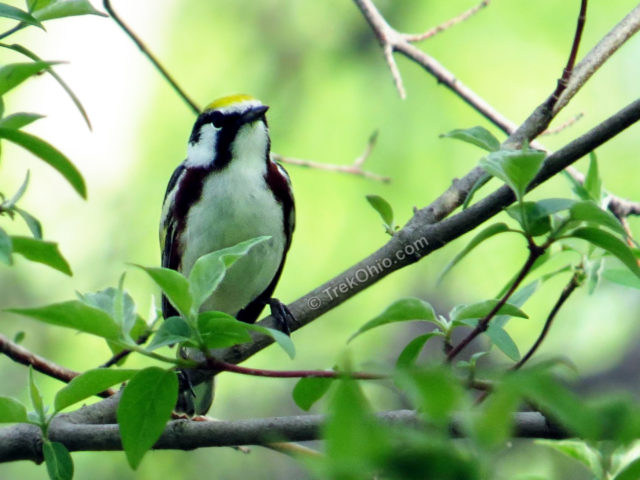 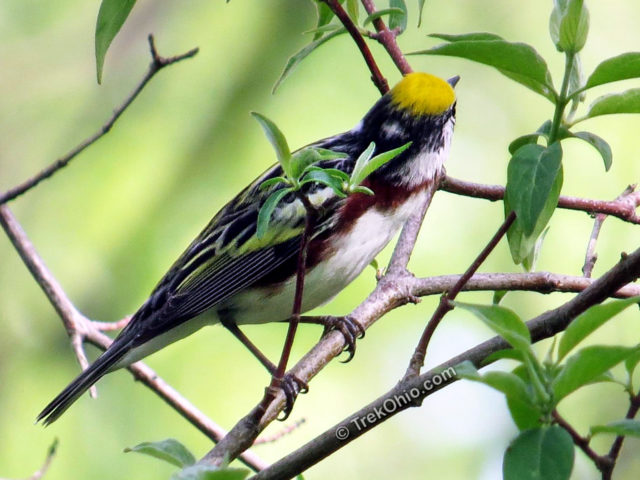 The two photos in this group show a Chestnut-sided warbler; only the second shot shows the chestnut (brown) streaks above his white belly.

Not all the warblers are migrating through the area. A number of species make their home in Ohio, including the Yellow Warbler pictured below on her nest.

While walking along the boardwalk, it was also possible to spy many non-warbler species, such as the Tree Swallow below.

And it’s always a pleasure to see the Baltimore oriole with its bold colors.

But one of my favorites was the screech owl below, who was resting in the shade mid-day some distance from the boardwalk.

The screech owl above was perching on a leaning tree. You can imagine how well it’s streaked colors would have blended in with the bark if the tree had been more vertical.

Despite the crowds we had a lot of fun seeing new-to-us birds. But next time we go we think we’ll finally venture beyond Magee Marsh. The event organizers provide guided tours of other areas. And since the birds are all lining up on the southwestern shore of Lake Erie prior to attempting to cross it, the same birds are visible at many other sites. We passed Toussaint Wildlife Area a number of times while we were driving around this area without every stopping by to check it out. Yet K.J. Appel, a visitor to our site, wrote:

At Toussaint on Wednesday 5/13. While the crowds of birders were at Magee, I enjoyed 22 species of birds. 10 of them warblers including Cape May, Bay Breasted, half dozen orioles, 3 eagles (1 imm), 4 Kingbirds, lots of sparrows. 2 Towhees were a treat!