One of our favorite locales for bird watching is Hoover Mudflats Boardwalk. We’ve previously posted about it here. This locale is constantly changing with the season and the level of Hoover reservoir, but it rarely disappoints.


Hoover reservoir is purposely lowered every fall to create a way station for migrating shore birds. But due to the drought, the water level has dropped earlier than usual. When summer began the boardwalk was several feet above the water’s surface. Last month the level had dropped so that portions of the boardwalk were directly over mud. Today those on the boardwalk look down on green vegetation. What had been an inlet for a feeder creek is now a stream that feeds a distant reservoir. Geese take advantage of the temporary meadow to graze.

We had been watching an osprey family all summer long. The family consists of the two parents and two newly fledged juveniles. A young osprey soared over us as we walked down the boardwalk.

Waterfowl such as blue heron and egrets are not deterred by the receding water. It’s shallower, and the fish and other aquatic creatures are more concentrated. We saw a blue heron walking along the stream feeding on small fish as it went. A group of egrets decided to join the feast. Although blue heron live in central Ohio all year-long, we only get to see egrets during migration. It was a pleasure to watch them in action.

While we were at Hoover Mudflats we were surprised to learn that two Ohio birding organizations had joined forces to hold a “Pledge to Fledge” event all around Ohio, including here. The two organizations were Audubon Ohio and the Ohio Ornithological Society. The idea behind “Pledge to Fledge” is to introduce other people to birdwatching by letting them use their scopes and by sharing their expertise. We spoke to two members of Ohio Ornithological Society who let us use their scope to check out the buff-breasted sandpipers who were feeding at Hoover Mudflats. This is an unusual bird for our area, and I had never seen one before. Besides these two individuals, we saw three other birding groups who had brought scopes to check out the migrating birds, especially the buff-breasted sandpiper. Since the ones that I saw were too far away for me to photograph, the photo below was published by Seabamirum. 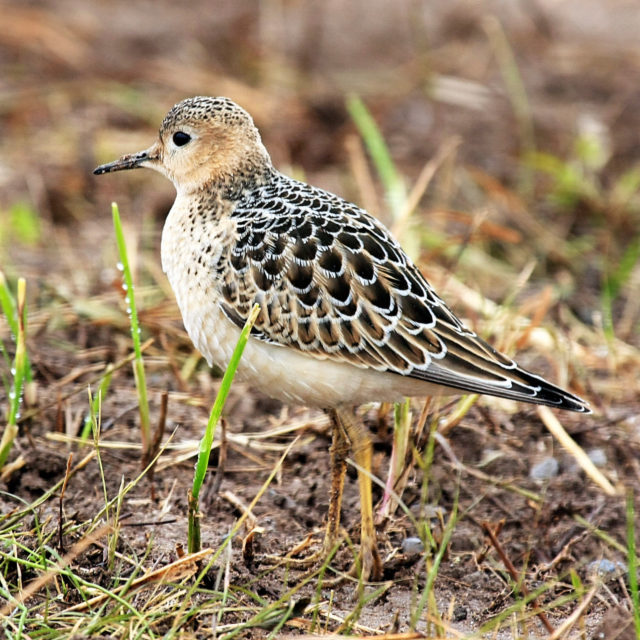 Many killdeer were also taking advantage of the low water level to forage for food.

During the fall migration a number of unusual bird species will appear at Hoover Mudflats to rest and replenish themselves before heading farther south. By the time winter arrives, the migration will have ended, and the mudflats will be submerged beneath the waters once again.

More on the Hoover Nature Preserve