Fowler Woods is a 187-acre, state nature preserve located in Richland Coundy in northeast Ohio. Originally the preserve featured a handicap-accessible, 1 ¼-mile boardwalk, but in 2014 much of the boardwalk was closed to the public due to safety concerns.  The boardwalk passes through mature forest, buttonbush swamps, and an area that was once farmland, but is now reverting to forest. Sadly the lower, wetland region within this area that is now barred to the public.  The preserve used to be one of the best sites in Ohio for viewing spring wildflowers, but since only a fraction of the boardwalk is now accessible to the public, many species of wildflower are no longer within sight.


Below I’ll share some of our old photos of the preserve that include areas no longer open to the public, as well as a number of spring wildflowers that bloom at the preserve. As to why the boardwalk has been partially shut down, officials at the Ohio Department of Natural Resources are concerned that the public may be in danger from the diseased ash trees. Apparently the state doesn’t plan on removing diseased trees near the boardwalk, so it is feared that falling limbs from these trees might hurt visitors to the preserve.

Photo courtesy of David Cappaert for the U.S. Dept. of Agriculture, license: CC BY 2.0 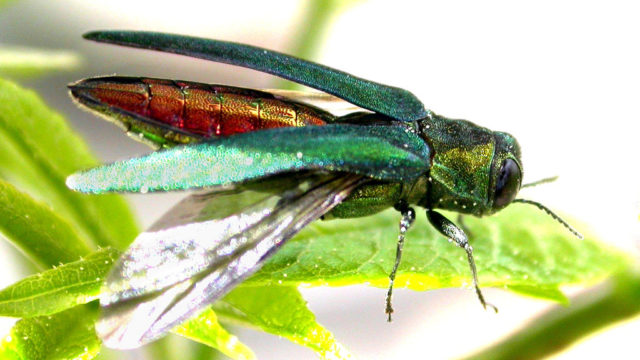 Mature emerald ash borer. It is actually the larval form of this insect that destroys ash trees.

Although emerald green, the little bug below is not the emerald green ash borer. It is the Six-spotted Tiger Beetle, and I seem to spot it on trails all over Ohio, including at Fowler Woods.

From the parking lot of Fowler Wood, it is easy to see the trailhead. By following it a short ways you come to a kiosk at the point where it joins with a boardwalk that makes a loop through the preserve. However last year gates have been erected on the trail that prevent access to a majority of the loop.

At the kiosk there is a map that shows the portion of the loop that remains open to the public.

Here are some of the spring flowers that we have viewed in the park in the past. Even though the habitats of some of these flower might no longer be near that portion of the boardwalk that’s open, I thought it would be a nice preview of what wildflowers will soon be blooming in Ohio.

Below are two wildflowers having yellow blooms. Although the flowers look similar, you can see the foliage is quite different.

The flower below rests on the ground under the foliage. It’s flesh-colored petals are thought to attract flies that eat carrion and that emerge from underground in the spring.

The pretty foliage below is produced by Sharp-lobed hepatica. The flower appears earlier in the year.

Below is Ohio’s state flower, the large-flowered trillium. It usually starts out white and turns a pink color as it ages.

Unlike the above trillium, the flower of the drooping (or nodding) trillium hangs down, often descending below the plant’s three leaves.

This species also comes in a maroon color.

Below is a plant known as “Bishop’s cap”. The flowers are extremely tiny, but beautiful.

I’m not sure which of the above flowers will be visible from the shortened boardwalk, but I do remember seeing violets and jack-in-the-pulpit relatively near the parking area.

In addition to a lovely display of spring wildflowers, the preserve is also known as one of the few places in north central Ohio where the veery live. Their song is described as “haunting”. You can hear it on this page at All About Birds. 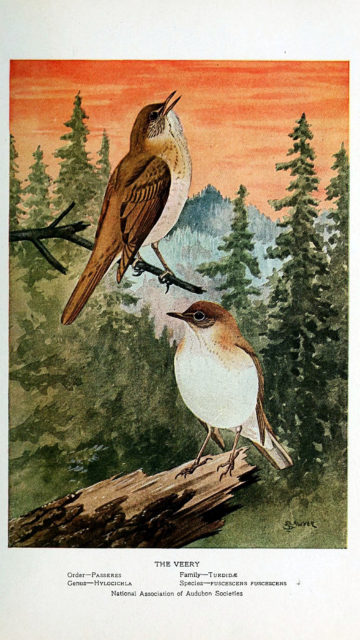 These birds are known as “Veery”.

Because of the preserve’s buttonbush swamps and vernal pools, there are many amphibians that make their home in Fowler Woods. But due to the presence of mosquitoes, you might want to liberally apply DEET, or time your visit for early spring or late autumn.