The preserve is 572 acres in size, and it features hiking trails, an observation deck, and a handicap-accessible visitor center. The site is highly recommended for bird watching. Our hike last September was about 1.8 miles in length, but we didn’t hike every portion of every trail. I’m guessing that the total trail length is between 2 and 2.25 miles.

The Visitor Center is right off the parking area, and it’s definitely worth visiting. Inside there are aquariums, information and exhibits on birds in the area, and information on the estuary. In addition, when we visited the center a year ago, almost every single field guide published by the Ohio Division of Wildlife was available at the this visitor center for free. If you are wondering what the field guides are like, numerous PDF versions are available on the web like the one on Ohio’s reptiles, or Ohio’s amphibians. or Ohio’s mammals, etc.

This is a screenshot showing a GPS trace of our trail with some surrounding features to show where the preserve is relative to Lake Erie and Old Woman Creek.

I have also uploaded the GPS trace of our hike to Google’s My Maps where you can further explore the area around the map.

Although I have been unable to find any trail maps online for the preserve, I created one by photographing one of the signs at the park, and tracing over the map. I added trail names which I’ve inset into the map in the lower left. The map is color-coded, so that the name of the trail is written in the same color as the path pictured on the map. For those who are color-vision impaired, I’ve also included compass quadrants near the trail name (such as NW, SE, etc.) to give you an idea as to which trail the name refers.

If you compare the above map with our GPS trace, you can see that we skipped the “Prairie Access” trail and a sizeable segment of the “Upland Woods Boardwalk.” But we did hike through most of the preserve. Below are descriptions and photos of the trails.

I note in passing that at every point where two trails met, the preserve had posted a map of the entire preserve with a “You are here” notation to mark your progress. In addition the trails were marked with the same colors that were used to identify the trails on the map. You could get lost at this preserve, but you’d have to work really, really hard at it.

If you only have time to hike one trail at the preserve the Estuary Overlook Trail is the one to hike. Besides the attractive scenery, a portion of the trail passes by the shoreline of Old Woman Creek and even has an observation deck overlooking the creek. Besides seeing numerous great blue heron and egrets, we also caught sight of a buck who had recently managed to scrape off most of the velvet covering his antlers.

We took most of our bird photos from the observation deck seen below.

I really enjoy watching herons and egrets catching fish. Below is a 30 second video that I filmed from the observation deck of a great blue heron catching a fish. You can also watch the film directly at YouTube https://youtu.be/z9dHjvt8Pn8.

And here are a couple of shots of the Estuary Overlook Trail. 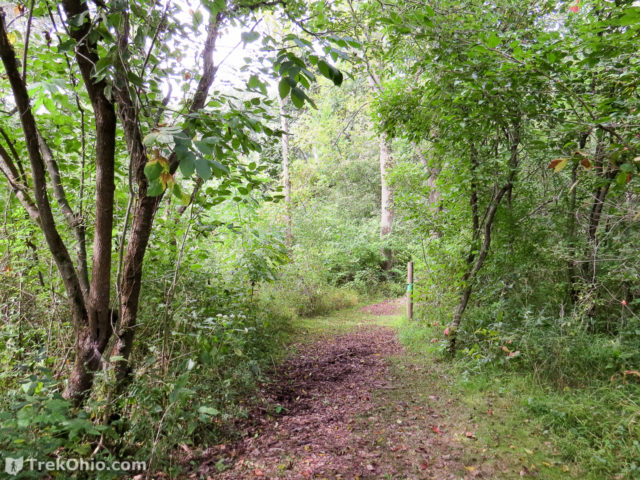 Successional usually refers to the process of a field gradually sprouting shrubs and trees and eventually becoming a forest.

After the Estuary Overlook Trail, the Upland Woods Boardwalk was my second-favorite trail.

Some of the Smaller Sights

We were at this preserve toward mid-September of last year. As summer draws to a close, I appreciate whatever wildflowers and butterflies I see.

I’ve seen the fruit of wild cucumber before, but here was my first chance to see its flowers. An individual plant puts forth both female and male flowers. The fruit is not fleshy like the cultivated cucumbers that we eat, but inside it has a lacy interior within which four seeds grow.

So Who was the Old Woman?

So like me you are probably wondering about the name of the preserve. Of course it is named after the creek, Old Woman Creek, but who was the creek named after? According to one of the informative signs of the preserve, once local legend about the creek’s name was published in 1920 in a book by Rood and Tuttle called “Stories from Beyond the Borderland.” The legend describes a Native American woman named Minehonto who drowned herself in the creek in her grief over her daughter’s death. An alternative story as to the creek’s name tells the story of an older, unnamed Native American woman who was murdered here following the defeat of the American forces at the battle of Raisin River in 1813. So it would seem that the creek was named after a Native American woman who died tragically here, but nothing’s known with certainty.

Note: “ODNR” below refers to the “Ohio Department of Natural Resources”.

If you go, I recommend using mosquito repellent.