Lawrence Woods State Nature Preserve is located in Hardin County, and at 1,035 acres it is the largest woods having mature trees in the area. The nearest metropolitan area is Columbus, Ohio and for residents there it would take an hour to an hour-and-a-half to drive to Lawrence Woods. It’s 4 miles from Kenton, Ohio, and the woods seems to be very popular with the local people. While I was visiting in late October I saw people of all ages strolling the boardwalk. The woods is adjacent to large meadows.


When I was at Lawrence Woods there were handouts at the preserve’s kiosk explaining what was located near numbered posts along the boardwalk. That’s how I learned that the above photo was the “Rhinoceros Tree.” It’s unusual shape was probably due to another tree falling on it when it was young. The odd shape also made its timber undesirable which means that it has been ignored for a long time and has reached a ripe, old age.

The boardwalk is made of synthetic planks; it appears that the local people contributed funds toward its construction by buying planks like the ones below to memorialize family members. I’m not sure exactly how long the boardwalk is, but it felt like I walked maybe a mile or so. The boardwalk is a loop, so no need to double back.

When I was there the fall color was past its peak, but it still made for a pretty walk. Here are a few photos to give you an idea of what the boardwalk is like.

Apparently there are a lot of wet areas in the woods, including button-bush swamp. At one point on the loop there is a small spur that goes in toward one of these swamps and terminates at an observation deck.

As I was approaching the observation deck a squirrel was grooming his teeth by gnawing on one of the benches. The pieces of the bench that support the seat and back are made of some sort of recycled material that apparently is just perfect for shortening overly long rodent teeth. It looks like someone was trying to save the benches from the squirrels by wrapping chicken wire around the legs. Too bad this seems to have had limited effect. I was afraid to sit on the benches, but it looks like leaning back would be even more problematic since very little support is left for the back.

In central Ohio I primarily see gray squirrels and fox squirrels. However during my walk at Lawrence Woods I saw quite a few red squirrels. If you are unfamiliar with them, they are small squirrels, slightly larger than chipmunks. I think they’re cute.

The park’s official site says that Lawrence Woods is a great site for viewing spring wildflowers. In addition to the more common wildflowers, a couple of rare plants live in Lawrence Woods. Heart-leaf plantain is only known to grow in three sites in Ohio, one of them being Lawrence Woods. 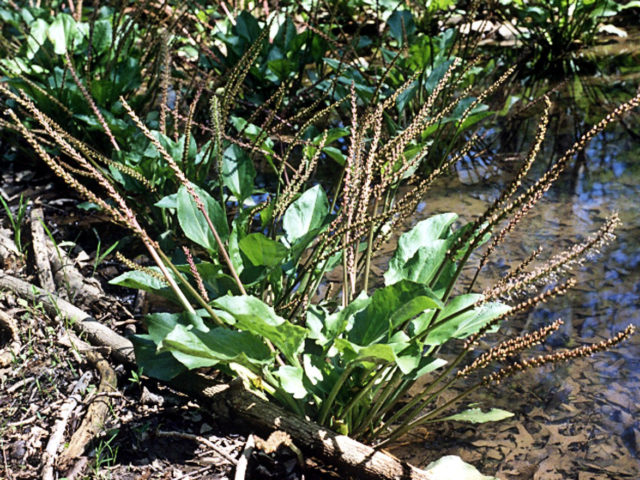 Another plant, Grove Sandwort, is endangered in Ohio, yet it grows along the boardwalk here. Since I was visiting in October I didn’t see it myself, but here’s what the plant looks like. 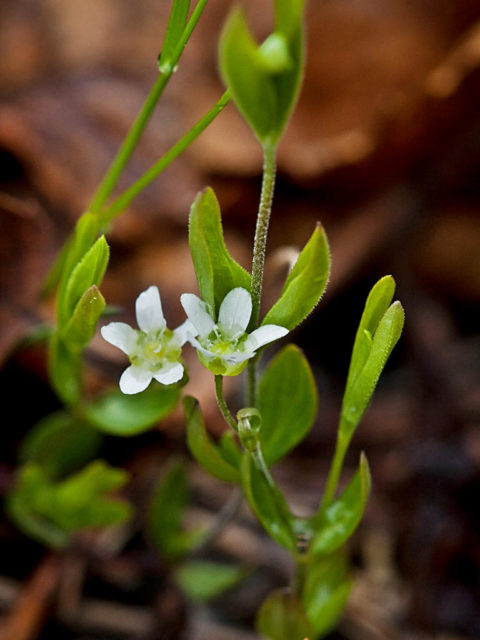 There is a large meadow adjacent to Lawrence Woods. Since the preserve’s kiosk contained a lot of information on butterflies and caterpillars, I assume that the meadow would be a good spot for viewing these. However I just learned from a blog post by Jim McCormac that it is also a great spot to watch raptors hunt. He describes watching four or five short-eared owls hunt there just after dusk. McCormac says that several other species of owl live in that area, plus other raptors. If you’re interested in doing a bit of bird watching there, I suggest you check out his post because he identified where to go to watch them. 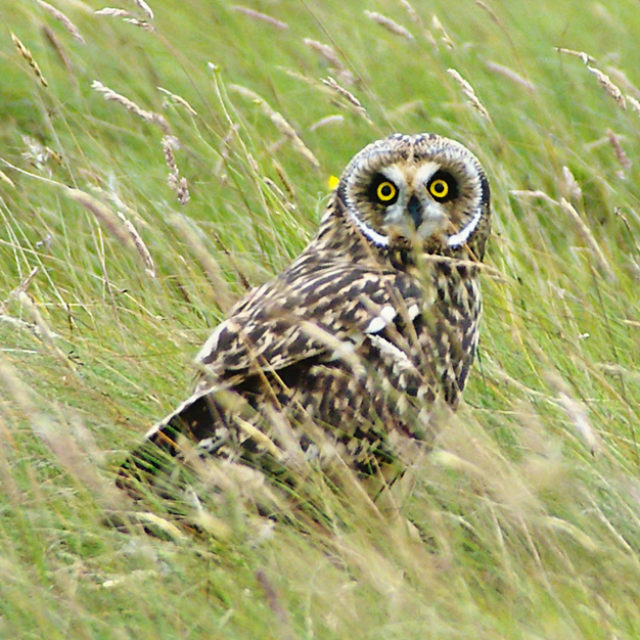