December 1st was an unusually warm and sunny day for Ohio… shirt-sleeve weather really. We decided to take advantage of the sunny weather by visiting the 502-acre Marie J. Desonier State Nature Preserve in Athens County. The preserve is known for its hills and deep ravines.


The preserve’s main trail is the Oak Ridge Trail. This is an irregular loop trail that starts near the kiosk at one end of the parking lot and returns at the other end of the parking lot. There’s a short spur trail once you reach the first ridge line called the High Meadow Spur Trail. If you hike both the loop and the spur trails you’ll walk around 2.7 miles.

The trails criss-cross the Jordan Run which is a tributary of the Hocking River. We also crossed many small, seasonal streams that were mostly dry this time of year. Almost all of these streams had well-constructed bridges, so no wading is required.

The preserve’s official website indicated that there was a large beaver pond at the preserve, and to our dismay we apparently walked past it without realizing it was a beaver pond. We believe that we photographed part of the beaver pond in the photo below.

When you look at this area via Google Maps in satellite mode, you can see a series of ponds running off the left. This is a close-up of the earlier trail map, focusing on the lower left portion of the loop trail. If you are going clockwise around the loop, this bridge is located on the first big turn and after crossing it you start to ascend to a ridgeline.

The ponds apparently draw a lot of water fowl in the spring, so it would definitely be worth while to check back then. Though we didn’t see any beavers, I had to include a shot of one having a snack. 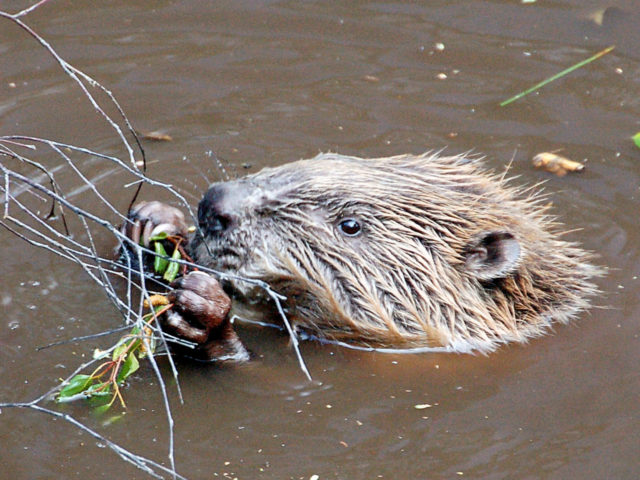 By the way during the Pleistocene era, there were giant beavers in Ohio that grew to be eight feet in length and which weighed as much as a modern black bear.

We hiked up and down a number of ridge lines and across several valleys. The preserve is primarily mature forest with some large beech, oak, and sycamore. Now that the leaves have dropped it was easy to see across ravines to hills on the opposite side. Although there were a couple of instances of rock outcroppings near the trail, we also noticed a number of rock outcroppings near the tops of distant hills. These won’t be visible once the foliage returns.

The trail lacks blazes, but it is very well laid out. Even covered with a carpet of autumn leaves, navigation was easy. Most of the stream crossings are spanned by sturdy wooden bridges.

Overall, a very pleasant hike, and a preserve well worth visiting.

The preserve is named after Major Marie J Desonier. Major Desonier was born Marie Stone and grew up in Athens County. During World War II, she was in charge of all the army nurses in Europe, reporting directly to General Dwight Eisenhower. She was known as “Chief Nurse of Europe”, and as such she was the first American military woman on the European continent following D-Day. After her death the Stone family donated the land for the preserve to the ODNR which was named in her honor. I’ve included a link to additional historical information about the Stone family and the preserve below.

View or get directions from Google Maps

Directions: From US-50 / OH-32, turn onto CR-56 (Brimstone Rd). Follow Brimstone Rd and then turn left onto Deep Hollow Road. Shortly after it turns to a gravel road, you will see a brown sign on the left announcing the preserve, and a gravel parking lot with a kiosk.