The Galena Village Administrator, Jeanna Burrell, recently contacted me about a new nature club that is forming in central Ohio. If you are unfamiliar with the Village of Galena, it is in Delaware County at the northern end of Ohio’s Hoover Reservoir; this is the reservoir which supplies drinking water for our state’s capital, Columbus. Galena is also home to the Hoover Mudflats Boardwalk which we’ve written about on a number of occassions. Galena is an especially good site for bird watching; it’s attractions include:


As we described in our post, Return of the Osprey to Hoover Reservoir, the nesting platforms were built by private citizens such as Dick Phillips and Dick Tuttle. Dick Tuttle will initially be leading the activities of the Nature Club by informing members how they can help enhance the natural environment in the area. Among other things members will learn to assist Dick in managing the osprey nesting platforms, and they will eventually take over this responsibility from him.

Meetings for the new Nature Club will be announced in the newsletter for the Village of Galena which can be viewed online here. Or you can arrange for the newsletter to be emailed to you by contacting Jeanna Burrell at adminassistant@galenaohio.org. If you think you might know someone who would be interested, spread the word! Or consider liking this article on Facebook.

In addition to many successful breeding years for local osprey thanks to the nesting platforms, this area of Ohio has the greatest concentration of nesting Prothonotary Warblers in the state. The Prothonotary Warbler is one of only two species of warbler that nest in cavities. Volunteers have increased the number of suitable nesting sites for these warblers by locating many nesting boxes in their preferred habitat above the waters of Hoover Reservoir.

Chimney Swifts are amazing little birds. Before Europeans moved to North America and started constructing chimneys, it is believed that Chimney Swifts roosted in hollow trees and caves and on the sides of cliffs. Unlike many birds, Chimney Swifts cannot perch; instead their talons are designed to cling to vertical surfaces. Even their tail feathers have adapted to support vertical clinging. The final half-inch of each tail feather is a bare, pointy shaft without the feather-fluff one would normally expect. These pointy tail feathers are braced on the wall to help keep the bird from slipping.

Although these birds must have used natural habitats before Europeans arrived, they rely almost entirely on man-made habitats now. However modern chimneys are not usually conducive to nesting or roosting birds. Their flues are too narrow, and they are often capped. For this reason you’ll now see artificial chimneys in many parks to provide an alternative habitat.

After the Chimney Swift’s brood has fledged, the birds reside in communal roosts that often number in the hundreds, and sometimes even thousands. The body heat generated in such roosts can make the roost 70° F hotter than the temperature outside.

In case you were wondering how the birds respond to smoke in the chimney (I know I was!), it turns out that Chimney Swifts spend the winter in South America, so they aren’t here when a chimney is most likely to be in use.

When the communal roost is disturbed, hundreds of Chimney Swifts may do a synchronized, single flap of their wings. Given their sheer numbers and the resonant properties of their roost, this can sound like a clap of thunder and may scare away a predator.

The Chimney Swifts who were summering in the Village Hall’s chimney in Galena have already begun their migration to South America. However Chimney Swifts from farther north often shelter in this same chimney as they make their way south, so it will have temporary residents for a while.

Chimney swift in flight; you can see some of the pointy tail feathers. 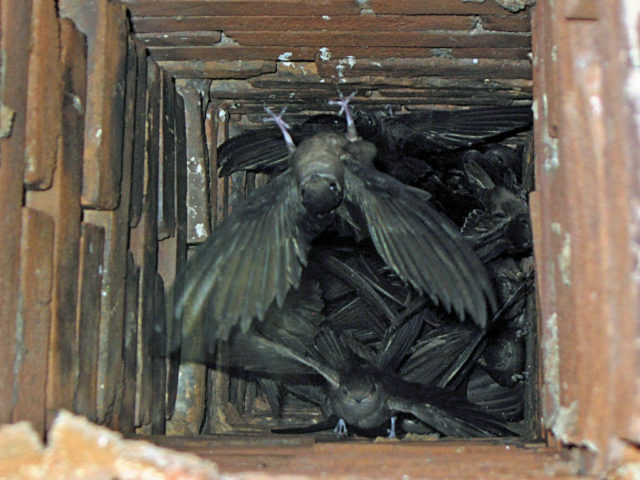 Chimney swifts in chimney… somewhat alarmed at being observed in their hideaway.

You can use the map below to locate Galena. By clicking on View Larger Map, below the embedded map, you can explore the area in Google Maps.