Many of the places we hike are in forests, or rural parts of Ohio. Gorge Metro Park is right in the city of Akron and it’s spectacular. The park is 155 acres and is located on either side of the Cuyahoga River. There is a dam on the river near the park’s center. The dam was built at the former site of a cascade waterfall in 1911 to provide electric power. The power plant is gone, but there is a path to a series of observation decks to view the water cascading over the dam. Upstream of the dam is a dock for fisherman and a picnic area overlooking the lake formed by the dam.


There are trails on either side of the river, with two separate entrances and parking for trail access. We parked at the main entrance and followed the trail past the fishing docks to the dam observation deck. After the dam, the river sits at the base of a steep gorge valley with large rock outcroppings. This is also the beginning of the 1.8 loop Gorge Trail. The trail follows a path on the upper end of the gorge, loops back and returns on a parallel track midway up the valley. 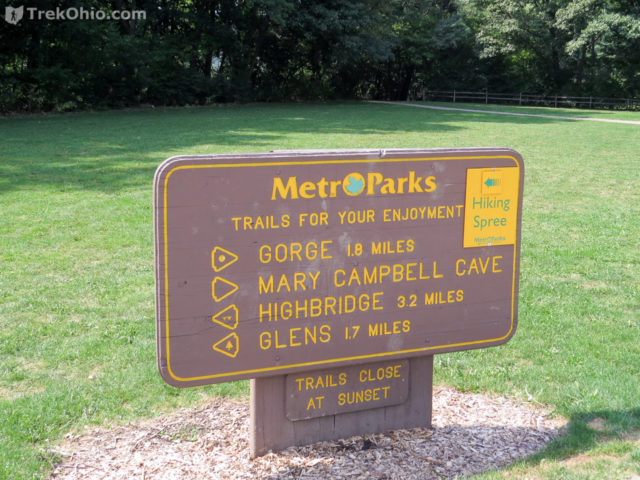 Our first stop on the trail was Mary Campbell Cave – a shallow recess cave in the Sharon conglomerate sandstone. The path continues past a side canyon which featured a seasonal waterfall and an area strewn with large boulders. I was very much enjoying the hike at this point, but it kept getting better. The upper trail then comes to a signs warning of “Primitive Trail Conditions Ahead” and then another providing an easier bypass trail. We opted for the more interesting (i.e. ‘difficult’) trail and we weren’t disappointed.

We chose “difficult” which led us to the upper trail.

The trail passes through a long series of narrow clefts in the rock with 20 foot cliffs rising on either side. Some are close enough to reach out and touch both walls at once. A one point the trail approaches a narrow opening in a cliff face with stairs carved into the rock itself. You enter the opening and climb up the steps emerging through a narrow split in the sandstone. Awesome!

The final rock cleft emerges on a cliff high over the Cuyahoga River valley. You have the option of taking a path down to a nearby street or returning on the lower part of the trail. We took the return route and the path descended to the lower trail via a switchback and finally a lengthy set of wooden stairs.

The lower part of the trail lacked the dramatic rock outcroppings, but was pleasant and scenic, passing through forest with occasional glimpse of the river valley below. We soon heard the sound of the water rushing over the dam and then took the path back to our car. Total distance for the hike was about 3 miles.

One thought on “Gorge Metro Park”