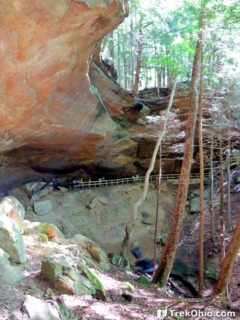 There's a newly opened attraction at the Hocking Hills State Park: Whispering Cave. It is a recess cave that's nearly 300 feet wide with a drizzling, 105-foot waterfall pouring from its upper rim. Getting Oriented The new trail is called the Hemlock Bridge Trail. It begins near the parking lot for the Hocking Hills Dining Lodge which is closed for the time being. You'll find a kiosk for the new trail toward the northwest end of the parking lot (the end opposite from the lodge). END_OF_DOCUMENT_TOKEN_TO_BE_REPLACED 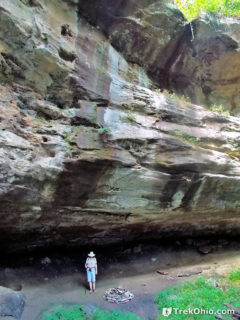 Bob and I had really wanted to explore the Rockhouse Trail, so we could view Turtlehead Cave. This past September we decided to make that happen by combining this trail with several others to come up with a loop hike that was about 5 miles in length. Our hike took us through a variety of different parks and preserves in quick succession. We began in Sells Park and passed through the Dale and Jackie Riddle State Nature Preserve, as well as the City of Athens Preserve Land until we came to Strouds END_OF_DOCUMENT_TOKEN_TO_BE_REPLACED 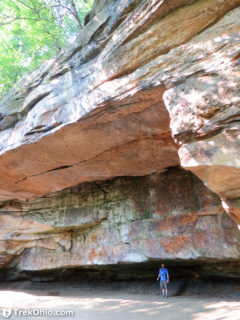 Many of the places we hike are in forests, or rural parts of Ohio. Gorge Metro Park is right in the city of Akron and it's spectacular. The park is 155 acres and is located on either side of the Cuyahoga River. There is a dam on the river near the park's center. The dam was built at the former site of a cascade waterfall in 1911 to provide electric power. The power plant is gone, but there is a path to a series of observation decks to view the water cascading over the dam. Upstream of the dam is END_OF_DOCUMENT_TOKEN_TO_BE_REPLACED 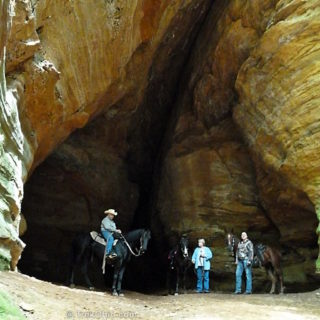 Chapel Cave is a large chapel-shaped, recess cave located off a bridle trail in the Hocking State Forest. The cave is also known as Twenty One Horses Cave because it is reputed to be big enough to hold 21 horses (with their riders). This posting is the last of a series of hikes we took starting at the parking lot for the Rock climbing and Rappelling Area of the Hocking State Forest. The trailhead for Chapel Cave is located on the north end of this parking lot. It's a bridle trail marked END_OF_DOCUMENT_TOKEN_TO_BE_REPLACED 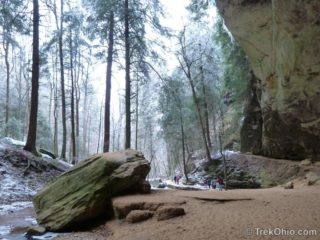 Ash Cave is another popular attraction in Hocking Hills State Park.  It is accessible by car on SR 56, a short drive from Old Man's Cave and Cedar Falls. Ash Cave is Ohio's largest recess cavern.  It is at the end of a roughly U-shaped valley surrounded by cliff walls.  High above the recess cave a waterfall spills into a stream that traverses the valley floor. There is a small parking area at the entrance to the short trail that leads to Ash Cave.  Additional parking is just END_OF_DOCUMENT_TOKEN_TO_BE_REPLACED 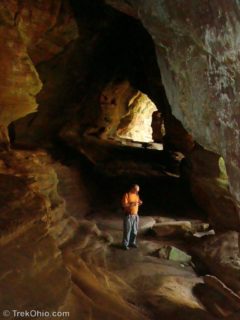 Rock House is one of the smaller parks of the Hocking Hills State Parks, but it contains ... yes, you guessed it ... a rock house.  The Rock House is a real cave inside a cliff of Blackhand sandstone.  It consists of one large (long) rectangular room with a couple of entrances and several "windows".  One of the windows overlooks a cliff with a seasonal waterfall. The actual trail is a relatively short loop trail, but the Rock House and cliff it's embedded in is well worth END_OF_DOCUMENT_TOKEN_TO_BE_REPLACED 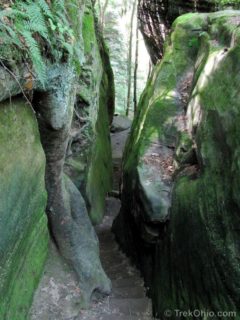 Cantwell Cliffs is located in the Hocking Hills State Park off of SR 374. Amenities include a parking lot, somewhat primitive rest facilities and two picnic shelter areas. From the parking lot a trail leads down a series of earthen steps to a cliff edge. To the left steps descend through a narrow staircase carved into the rock. To the right a trail continues along the cliff rim. Choose either direction as the trail is a large scenic loop. To the right, the trail follows the END_OF_DOCUMENT_TOKEN_TO_BE_REPLACED 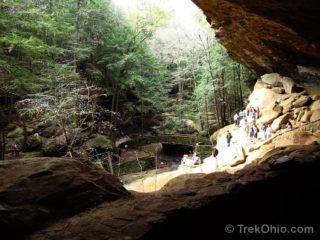 Hocking Hills State Park is the most popular park in Ohio, and Old Man's Cave is the most popular location in the park. Old Man's Cave is not a cave in the traditional sense of an underground limestone cavern. Instead it is a deep gorge with a large, overhanging lip made of erosion-resistant, blackhand sandstone. The stream that runs through the gorge is marked by a series of waterfalls and rapids. This region is known as "Old Man's Cave" because one side of the gorge has a recess cave where an "old END_OF_DOCUMENT_TOKEN_TO_BE_REPLACED